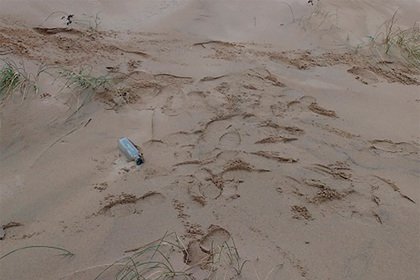 Residents of the Irish city of Belfast, while walking on the beach, found a letter in a bottle, which in three years sailed five thousand kilometers, and decided to track down the sender. About it informs Donegal Daily.

Rita Simmonds and Kieran Marron were walking on the beach and found a glass bottle in the sand that contained a note and two dollars. The couple carefully opened the bottle and learned that the message was written by an 11-year-old child named Sasha. The author of the message told how three years ago he threw a bottle into the sea in the American Ocean City, Maryland. The note indicated a phone number, but it turned out to be disconnected.

Simmonds and Marron decided to continue their search online. They learned that Sasha is a boy from Minskwho once lived in Maryland. Presumably, he could return to study in Europe. It turned out that the journalist for the newspaper of the city of Baltimore, Maryland, has a friend who knows Sasha’s parents. Simmonds and Marron are pleased that their search is progressing, and now hope to contact the boy via video link.

“He’s probably wondered all these years what happened to the bottle,” Simmonds suggested. She said that she often walks along the beaches with Marron, but they never expected that their New Year’s walk would take such a turn. Previously, the couple found only fossils on the beach.

Previously reportedthat a family from Wales found a message in a bottle written more than 30 years ago by schoolchildren in a river in the river, which during this time covered 10 kilometers. At first, the Welsh thought the plastic bottle they found was trash, and they picked it up to throw in the trash can, but then they saw a note inside.