Cycle lanes everywhere, where should I go? Motorists drive a sharp campaign, helped by a quirky comedian 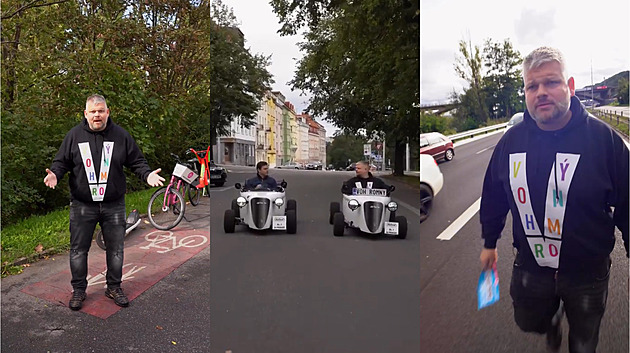 Motorists go to the elections with a clear election theme, which is problematic traffic. And they conceived the campaign in a very original way.

As we already wrote, the candidates and sympathizers went straight into the traffic jams in the streets of Prague. There they conduct a contact campaign, address angry drivers, distribute leaflets.

However, Petr Macinka’s movement also operates on social networks. It was played with the actor, entertainer and today above all influencer František Sládek, who performs as František the Magnificent.

Together with Macinka, he filmed several spots where he plays a disaffected Praguer in his unique style, after which the leader of the movement presents him with the points of the program.

In the next spot, František complains that he is standing in a taxi in front of the Barrandovský bridge, although the Pirates say that Barrandďák is driving without a problem during the reconstruction.

“There is a free bus lane next to us, but no bus has passed here for twenty minutes, we could have gone there!” he sobs.

The video in which the entertainer presents go-karts as the only means of transport that can be driven around Prague is also a success.

Motorists promise themselves that a controversial and daring contact and internet campaign will help them win a place in the Prague council. Mayor Zdeněk Hřib praised their courage in an interview with Expres.cz, although he added that, from his point of view, the election theme of Motorists is absurd.

“I like that they don’t hide behind anything. They have a clear election theme. That topic is absurd from my point of view, because why do you think, for example, that we are repairing Barrandďák, with whom would it probably fall if it were allowed to go as far as the governments before us let it? Of course with motorists. And who are we fixing the roads for? But what I personally like about them is that they are not hypocritical like, for example, ODS, which gives an interview one day saying that they will cancel all cycle lanes, and in a few days another interview comes out where they say that they will not cancel cycle lanes. Or when Bohuslav Svoboda claimed ten years ago that metro D was pointless, and now pretends to support it. In the same way, he said that we need to close the roads in the center and draw cycle lanes on them, and now he is again a big campaigner against cyclists. Even though I don’t agree with the way they present it, the name Motoristé clearly says what they want to do. It’s nice and clear,” said the mayor.