Election 2022 | A woman threw a pie in Okamura’s face at a meeting. Desperation, says the head of the SPD 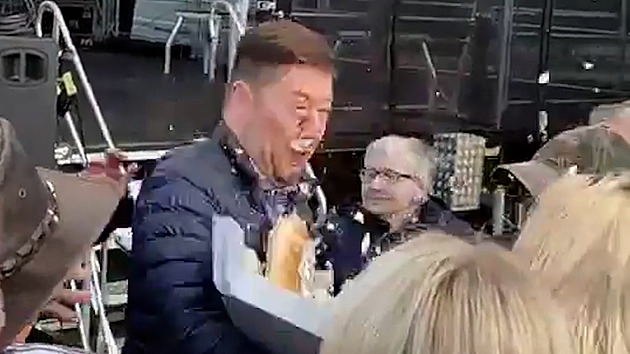 After the opening speech in the park in Prague’s Prosek, the head of the SPD movement stepped down from the stage and walked among the visitors to take a photo with them. At that moment, a woman approached him with a box of pastries, first showed the chairman what she had brought, and then threw the open box in his face.

Okamura’s opponent belongs to the Biotická Pekařská Brigáda collective, which describes itself as anarchists and which commented on the incident on social networks. “He is a trader in fear and a populist who will say anything just to win over and manipulate the masses of people, and then to be able to sit on the throne and rule with a heavy hand,” the group said of the SPD leader.

The woman then added that “Okamura’s disdainful and blaming rhetoric on those who find themselves in a difficult life situation from which they cannot help themselves disgusts her.” “It makes me angry and makes me want to bake strudels,” the activist said, adding that the cake was made from discarded food and vegan whipped cream.

The chairman of the movement responded to the incident by saying that it was a desperate cry and a lie. “Within half a second, plainclothes policemen, whom I didn’t know about, stepped in. The main lie is that they didn’t manage to put any cake in my face,” Okamura told iDNES.cz.

“Policemen, as part of public order supervision at the ongoing rally, detained the woman who attacked Mr. Okamura with a cake for the necessary time. The woman is suspected of an offense against civil cohabitation and was released after being secured,” said police spokesman Jan Daněk.

According to Okamura, the woman who brought the box is “apparently a supporter of the Pirates, because they’re anarchists.” “I only slightly opened the box. As she made a movement from the bottom up, the security guard put his hand there. She failed to put it in my face. It just spewed out,” Okamura said. “The assistant wiped me a little and I continued to take pictures with a smile,” added the chairman. According to him, he experienced a similar incident for the first time.

The group is inspired by the foreign collective Biotic Baking Brigade, whose members in the 1990s in the USA threw cakes at, for example, Bill Gates or influential American politicians.

“We want to restore this collective, or its form of action, again. To re-embody his ideas and practices of political and moral expression in the public space and reach out to others with them – to encourage them to similar or identical political and activist activity in the war against the powerful and ruthless. For example, using cakes or strudels; albeit in a different time, in a different part of the world and with other beings,” the group said on Facebook. However, his profile has only been active since Thursday.