Election 2022 | Okamura voted with a torn ballot in protest. TOP 09 thanks him for his vote 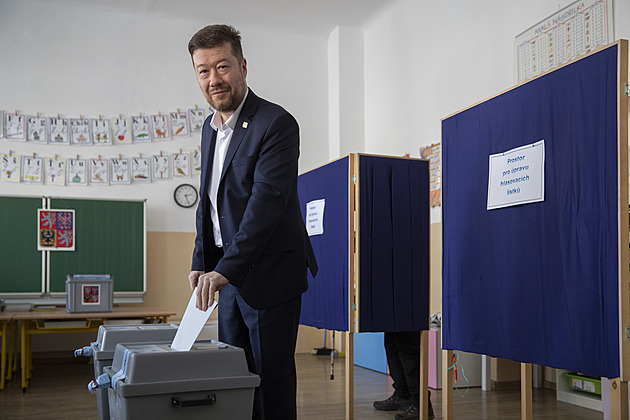 “I pinched his ballot and tore it up again. This is how I took part in the elections, I am always in favor of going to the elections. My vote will be counted among those cast, however, I expressed my disapproval and at the same time reduced the percentage result for Mr. Růžiček, because I absolutely do not agree with the policy of TOP 09 and the government coalition,” MP Tomio Okamura told ČTK.

However, if he described the invalidation of his ballot in the senate elections accurately, then according to section 70 of Act No. 247/1995 Coll. on elections to the Parliament of the Czech Republic and confirmation by the Ministry of the Interior is valid. The fact was also pointed out by lawyer Petr Suchomel.

“Ballots on which the voter has made various adjustments are also counted in favor of the candidate. Damage or mishandling of a ballot paper does not affect its validity if the necessary information is visible on it,” the law states.

Okamura allegedly “crossed out and tore up” the ballot with Senator Růžička in protest. So apparently he cast a valid vote for the TOP 09 candidate. All those forums on the net were filled! ✅ https://t.co/nV5QOQcug9

TOP 09, for which Růžička is running for the Senate, has already reacted to the situation. “We sincerely thank Mr. Okamur for voting for Jiří Růžička. Good choice,” she wrote on the Twitter page. The editors of iDNES.cz contacted Okamura with a request to confirm their voting procedure in the senate elections, but have not yet received a reply.

Okamura: The advancement of the SPD candidates to the 2nd round will be a success

After casting his vote in the municipal elections, Okamura reiterated that the election would be a referendum on the government. In the event of elections to the Senate, Okamura would like the formation of a Senate opposition to the current government coalition of five.

“Senate elections have their own specificity, the parties that have had mayors and deputy mayors in senate districts for many years will have a big advantage. I would therefore consider it a great success if one of the SPD candidates advanced to the second round,” he said.

“In the senate elections, there is also a stake in the second parliamentary chamber to raise a voice against the incompetent and asocial government of Petr Fiala. Because they do it in such a way that if they cannot declare something in the House of Representatives, they take the help of the Senate, and the voice of the current opposition is completely missing there,” he added.

Okamura arrived at the polling station 20 minutes after it opened. Dozens of citizens voted before him, some of whom expressed reservations about the presence of a large number of media. “Wouldn’t he (Okamura) want to move somewhere else?” said one of the women who voted.

19 SPD candidates are running for a seat in the Senate, one more is nominated for the SPD, the Tricolor and the Moravians. Regardless of the outcome of the senate elections, it is certain that the current government coalition will retain its majority in the upper chamber. MP Jiří Kobza or lawyer Zdeněk Koudelka, who is also a candidate of Trikolora and Moravians, are trying to win the premiership in the Senate elections for the SPD.

In the municipal elections, the SPD movement would like to win more representative mandates than four years ago. At that time there were 161 of them. The SPD movement is now running in 337 cities and towns, in fifty of which it has drawn up candidate lists with Trikolora, Svobodné and other groups.