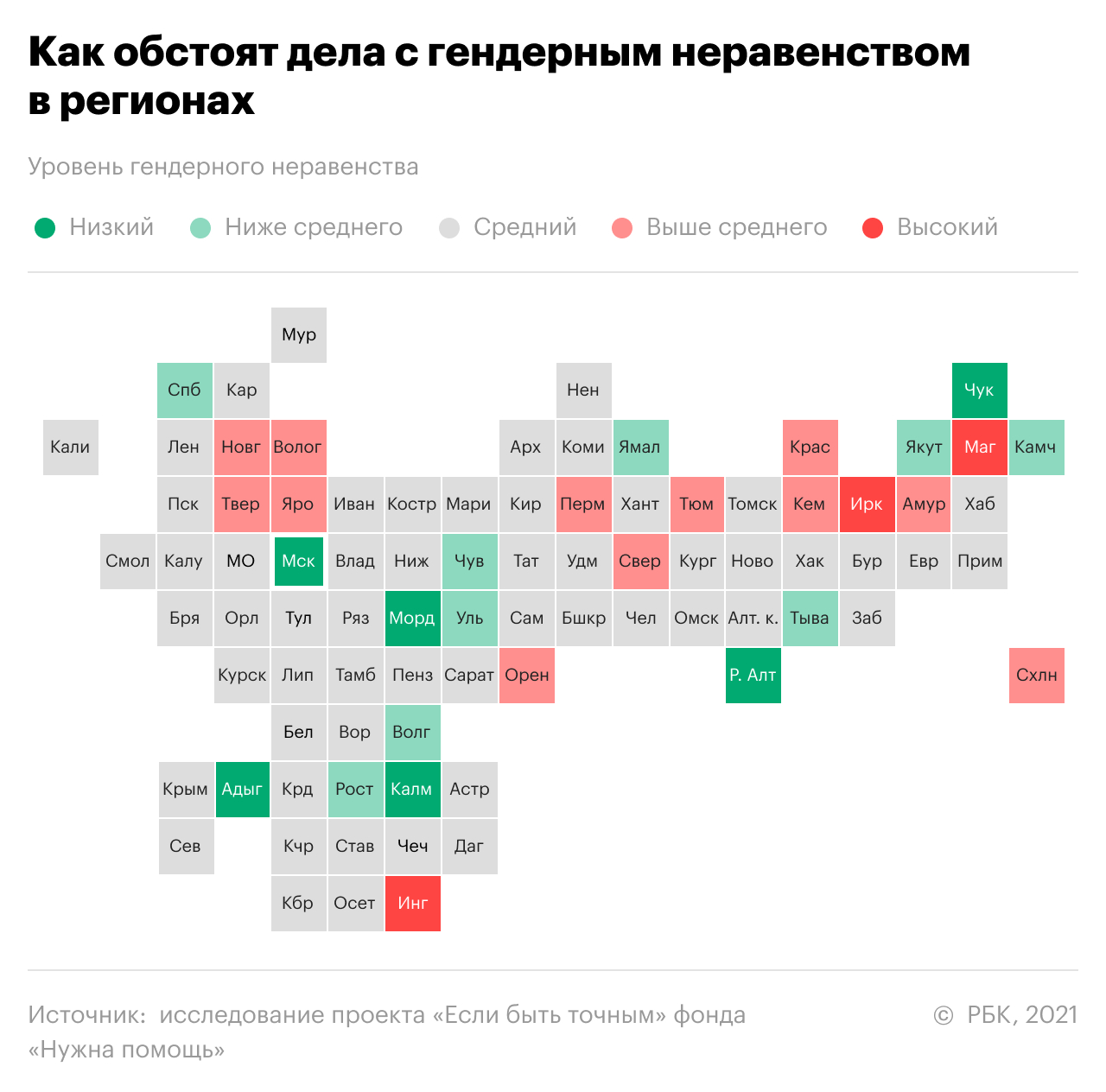 Regions with the greatest inequality

The largest gap in the status of men and women is in the Irkutsk and Magadan regions and Ingushetia. Irkutsk Oblast was at the bottom of the list due to the difference in life expectancy and income among men and women. There is also a gender bias in the region due to the number of leadership positions held by women. Unlike most other regions, there are far more female leaders than male leaders. At the same time, in the Irkutsk region, the time spent on caring (caring for children, sick, infirm and other loved ones) by men and women, as well as the participation of both sexes in entrepreneurship, is fairly evenly distributed.

Ingushetia is one of the leaders in terms of life expectancy for men and women (both of them live for a very long time by Russian standards). At the same time, in terms of the rest of the assessed parameters, the republic is leading in terms of gender inequality, and in terms of time spent on caring for and access to power, the indicators there are the worst in the country.

In the Magadan Region, women spend incomparably more time caring for loved ones than men. Perhaps this affects the situation with entrepreneurship – there is also a gender bias. In terms of life expectancy and participation in power, the position of this region is also close to the end of the list, but the pay gap is the average for the country.

RBC sent inquiries to the regional administrations – the leaders of the anti-rating.

As for the individual parameters by which the researchers assessed the situation in the regions, they differ from subject to subject. For example, among the Russian regions, the largest difference in life expectancy of women and men at the end of 2020 was observed in the Nenets Autonomous Okrug (14.4 years), Karelia and Mari El (11.8 years each), Vologda (11.7 years ), Novgorod and Magadan regions (11.6 years). In contrast, the smallest gap is observed in the Caucasus – in Dagestan (6.1 years) and Ingushetia (7.2 years), as well as in Moscow (7.4 years).

The gender pay gap – the difference between the average earnings of men and women – in Russia, according to Rosstat data for 2019, was 31%. This is significantly higher than the global average, the researchers note.

The minimum difference in the salaries of men and women in Russia is in Ingushetia (1.6%). A small gap is also observed in the Republic of Altai (4.4%), Kabardino-Balkaria (12.7%), Kalmykia (13.5%), Chechnya (14.7%) and Dagestan (15.2%). In Moscow, the indicator is also low, at 19.1%. According to the authors of the study, the gender pay gap is highly dependent on industry, profession and position. So, among the industries with the maximum difference in salaries of men and women in 2019 were the areas of information and communication (32%), professional, scientific and technical activities (29%), transportation and storage (26%), culture and sports (26% ), mining (24%). The minimum is in education (5%), healthcare (12%) and construction (13%).

Help Needed is a non-profit foundation created by journalist Dmitry Aleshkovsky. It was opened in 2015. The project “To be precise” was created by the foundation, it positions itself as a single platform for NGOs, business and journalists who work with social problems in Russia. Mission of the project as explained on his website – promoting an analytical approach in highlighting and solving these problems.

In 2021, Russia, as in the previous year, took 81st place in the ranking of gender equality of the World Economic Forum (WEF). The WEF report stated that the gap in educational attainment between women and men narrowed in the country over the year, and there were more women in leadership positions. However, according to the research, the income of Russian women is still lower than that of men, and on average it is less than 60% of a man’s salary. In addition, there are few women in Russia among top managers and in politics.

As a minister, he came to a rescuer who survived in a mine in Kuzbass. Video – RBK