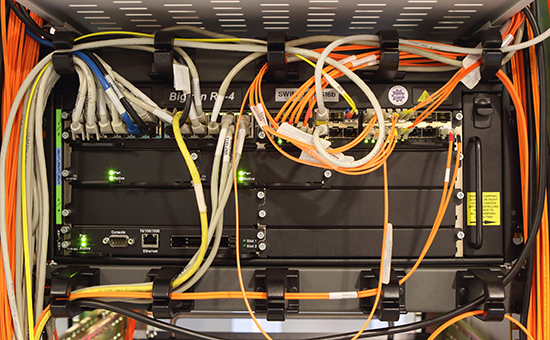 Another participant in the meeting confirmed that Google is a client of several commercial data centers in Russia, including the TrustInfo data center. “In October 2014, Google just installed about 40 racks that took up half of the data center room,” he said. Now, the businessman claims, the company rents the entire hall and is negotiating the lease of racks in another TrustInfo hall, he added. TrustInfo press secretary Elena Boglovskaya declined to comment on this information.

According to Khala, the rental price server depends on its parameters and configuration, but on average it is about 6 thousand rubles per month. Data center on the network 3Data contains from 15 to 60 racks, each rack can hold 30-40 servers, the expert added. It turns out that renting only 40 racks would require more than 7 million rubles per month.

But Google has all the equipment – racks and servers – its own, one of the interlocutors of RBC disagrees. “Google only needed a hall,” he said. According to him, the rent of space for one own rack is estimated at approximately $ 2 thousand (about 108.06 thousand rubles at the exchange rate of the Central Bank on April 9) per month, taking into account the supply of electricity, air conditioning and other services.

According to the analytical company PMR, in 2014 the volume of the commercial data center services market in Russia reached 11.7 billion rubles, which is 20.4% more than in 2013.

None of RBC’s interlocutors was able to assess the data storage capacity required by Google in Russia.

eBay and PayPal will also transfer

On April 3, the head of eBay in Russia, Vladimir Dolgov, and the representative of PayPal in Russia, Aleksey Abramov, at a meeting with the deputy head of Roskomnadzor, Antonina Priezzheva, confirmed that they were ready to collect and store personal data of Russian users “in full accordance with the law.” The press secretary of Roskomnadzor Vadim Ampelonsky told RBC about this.

eBay is a member of the working group (created on the basis of the Russian Association for Electronic Communications (RAEC) from the very first day, but such a meeting with the authorities was the first, Karina Grosheva, a spokesman for eBay, confirmed to RBC. According to her, the company wanted to get answers to a number of questions under the law on personal data, which will come into force on September 1, 2015. “We are now actively working with government regulators to study this law and its impact on the business of eBay and our customers,” added Grosheva.

According to Ampelonskiy, eBay was the initiator of the meeting. The company representatives were interested in legal issues, Ampelonsky added. For example, they asked how to isolate all users from the array of Russian citizens. According to Ampelonsky, Roskomnadzor recommends applying the “principle of territoriality” in this case. “If a user has registered an account on eBay from the territory of Russia (and eBay tracks this information), then he should be attributed to the Russian subject of personal data. If a Russian citizen is abroad and the collection of his personal data is carried out in a foreign state, then such cases do not fall under the regulation of Russian legislation, ”said Ampelonsky.

PayPal press secretary Galina Skatkina said that she was not aware of the meeting at Roskomnadzor. PayPal is talking with regulators about personal data law, she added.

Khala said at the meeting that foreign customers of 3Data have also begun to move their capacities to Russia due to the law on personal data. Thus, the American company Tourmaline Labs, which will soon launch the Ugo messenger for smartphones on iOS and Android on the Russian market, rented virtual servers in the cloud in one of the 3Data data centers. “Representatives of Tourmaline Labs, having learned that the new law will soon enter into force, turned to us for help. We advised them to keep servers in Russia for Russian users, which they did, ”the businessman said.

Another meeting on data storage will take place at the Ministry of Telecom and Mass Communications in mid-April, told RBC Marinichev. According to him, the main purpose of these meetings is to develop standards that will help the owners and operators of data centers to technically prepare for the moment 242-ФЗ enters into force.

“Together with the Ministry of Communications, we must prepare the industry and help companies that will transfer personal data about Russian citizens to Russian servers to do this in an organized manner and, if possible, with minimal costs,” Marinichev said at a meeting in March.

The representative of the Ministry of Telecom and Mass Communications noted that the law on storage of personal data was written by the deputies, and the ministry was not involved in its creation, therefore the wording is “not ideal”.

Republicans blocked the draft US defense budget for 2022 – RBK