Evgenia Tarasova and Vladimir Morozov were ahead of Alexandra Boykova and Dmitry Kozlovsky in the short program of the sports pairs competition at the European Figure Skating Championships and made a significant application to compete in the Olympic team tournament. However, the leadership at the end of the first day was taken not by Eteri Tutberidze’s wards, but by the reigning world champions Anastasia Mishina and Alexander Gallyamov, who renewed the world record.

If you try to answer the question which of the disciplines can turn out to be the most ruthless at the European Championships, the answer comes to mind instantly: pair skating. Already at the beginning of the Olympic season, it was clear that three Russian duos at once reach a fundamentally different level of confrontation, since they will have to fight for three goals at once: a place in the national team, a place in the Olympic team tournament and an individual Olympic gold medal. You can express this more figuratively in the words of the legendary coach Tatyana Tarasova, who once said about the path to the sports Olympus: “You have been climbing this mountain for years, and at some point all the air around you suddenly runs out. But you need to continue to climb at any cost … “

It was this stage that Russian pair skating reached by mid-January. The best overall result at the start of the tournament in Tallinn (234.58) belonged to European champions Alexandra Boykova and Dmitry Kozlovsky, as well as the highest scores for the short program (82.34), and the maximum “arbitrary” amount (153.37) was recorded at last year’s world championship by Anastasia Mishina and Alexander Gallyamov. 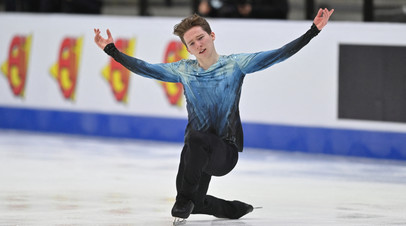 Out of competition: Mozalev, Kondratyuk and Semenenko lead after the short program at the European Championship in Tallinn

Russian figure skaters took the first three places in the short program at the European Championships in Tallinn. Andrey Mozalev, who replaced …

But Tarasova and Morozov were just slightly inferior. Two of the three personal records were, however, set by the skaters not at such significant tournaments as those where the rivals shone, but at the second-rate Challenger in Warsaw, but this did not negate the fact that the results were official, and meant that the athletes would continue to gain form before the most important start of the season.

At the Russian Championship, Tarasova and Morozov completed the minimum task – from third place they were selected for the Olympic Games. In Tallinn, the skaters had to fulfill the maximum task – to win the short program against one of the pairs of Tamara Moskvina, or better – against two at once. In this case, they could acquire the right to skate the short program in a team tournament, that is, with a high degree of probability, they will fight for Olympic gold without any gossip.

However, on the first day of competition, the duo did not do without blots: Zhenya touched the ice with her hand on the landing from the throw, but the judges chose not to notice this, having plucked the element. Everything else was performed by the skaters flawlessly, to the fourth level of difficulty. Thanks to this, Tarasova and Morozov improved their own record (81.58). Let it be only 0.37 points, but they improved it.

Boykova and Kozlovsky skated after them. Before the European Championship in Estonia, Sasha and Dima tried to bring their programs to the maximum brilliance, for this purpose they even went from St. Petersburg to the training camp in Novogorsk, where they were engaged in the final grinding of the elements under the leadership of Nikolai Morozov. Skaters have worked with him before, noting that a specialist knows how to give each movement fullness and awareness and, in general, helps to understand why they are skating.

After such prefaces, you usually expect a breakthrough, but, unfortunately, it did not happen on Wednesday. The mistake happened where she was not expected at all: Boykova thwarted the jump by performing a double salchow instead of a triple one, which is why the base cost of the element was lowered for both partners without regret. As a result – 76.26 points, modest by the standards of the struggle for gold.

The most offensive thing is to realize that a jump failure, which does not at all deprive the couple of the opportunity to fight directly for the title, will most likely turn out to be fatal for Boykova and Kozlovsky when considering the couple’s Olympic prospects: it turns out that they actually gave their place in the team tournament to their rivals themselves.

Mishina and Galliamov, who took the lead after the first start, surpassed their compatriots both in technical amount and in terms of components. A plus updated the world record… At the same time, the highest basic difficulty of the program remained with Tarasova and Morozov: the world champions lost points on the step sequence and twist – these elements were assessed by Nastya and Alexander only at the third level of difficulty.

All the rest that day played in another league and signed their own medal inconsistency – almost 14 points separated the prize-winning three of the closest pursuers of the Italians, Rebecca Gilardi and Filippo Ambrosini. By the standards of a short program, this is an abyss without any discounts, and in competition with Russian pairs, it is actually the Mariana Trench.

Journalist Shenderovich announced his departure from Russia – RT in Russian