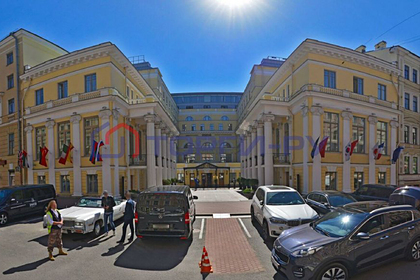 Official hotel State Hermitage under the name “Hermitage” was put up for auction in Petersburg… The starting price was 2.7 billion rubles. Bid message published on the resource “Torgi-ru”.

An eight-storey building in the center of St. Petersburg at 10A Pravdy Street with an area of ​​11,419 square meters is being sold together with a land plot. The auction will take place on January 26, 2022.

The hotel building was built in the 30s. During the years of the Soviet Union, there was a Palace of Culture for food industry workers. Later, the building was reconstructed in accordance with the requirements for the protection of architecture, and in 2013 a hotel with a loud name was opened there.

The hotel is unique, as it is the only one in the world that has received the right to use the trademarks of the State Museum through a licensing agreement. According to SPARK, the property belongs to the International Baltic Investment Company.

The man mistook the stranger for the lover of the ex-girlfriend and beat him: Incidents: From life: Lenta.ru

Rospotrebnadzor has indicated the lifespan of “last year” salads