In the UN, Lipavský called for the creation of a tribunal to prosecute Russian aggression 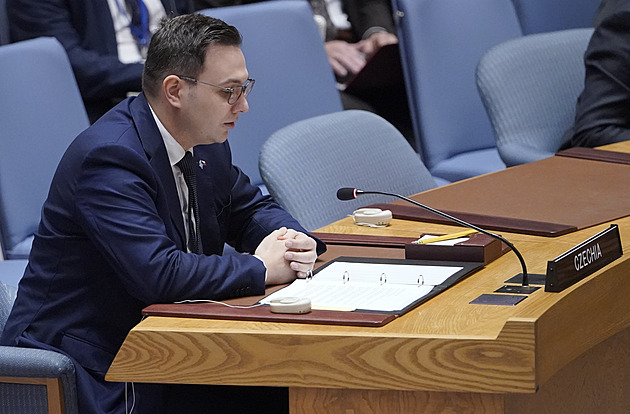 Lipavský, in the beginning of his speech on the topic of “preservation of peace and security in Ukraine”, described Russian aggression in Ukraine as “colonial, unprovoked and illegal” and noted that the Czechia received the largest number of refugees from Ukraine per capita, more than 400,000.

“Russian aggression is probably the most dangerous threat to world peace in the last decade. Today it concerns Ukraine, tomorrow it may concern another country,” he said.

“In August 1968, it was Czechoslovakia that was invaded by troops led by Moscow. Suppression of the so-called Prague Spring, violent interference in the peaceful life of another country, turned my country into an occupied colony,” added Lipavský, whose speech was the first appearance by the representative of the Czech Republic at the UN Security Council in almost thirty years.

The Czech head of diplomacy also emphasized that Ukraine has rejected enslavement and is bravely fighting for a multilateral world where rules protect peace.

“We are horrified by the atrocities committed by Russian troops in Mariupol, Bucha, Irpini, Izjum and other places. We are also extremely concerned about the reports about the so-called filter camps that Russia operates in Ukraine,” he said.

“Hundreds of thousands of Ukrainian civilians were taken to Russia, including children. There are testimonies of sexual abuse and gender-based abuse being used as tools of war,” he stated.

Minister @JanLipavsky as the first Czech in almost 30 years to speak at the UN Security Council:
“We are putting the Czechia back on the world map. I believe that Václav Havel would be proud of how he is doing and how foreign partners perceive us. We are a confident and sovereign country that has a lot to offer.” https://t.co/8LjjYFTOEY

The minister noted that these crimes need to be investigated and punished. “More than 40 states, including the Czech Republic, reported the situation in Ukraine to the International Criminal Court (ICC), which began investigating the events in Ukraine in March,” he said.

The head of Czech diplomacy also called for the establishment of a special international tribunal to investigate the crime of aggression committed by Russia in Ukraine.

On Wednesday, Lipavský already spoke at a meeting of the UN General Assembly, where he said that Russia is trying to “dismantle the security architecture of the European continent.” He called the Russian invasion “unwarranted, unprovoked and illegal.” He reminded that the Czechia supports the sovereignty, unity and independence of Ukraine within its internationally recognized borders.

The head of American diplomacy, Antony Blinken, emphasized at the UN Security Council meeting that Russian President Vladimir Putin cannot get away with breaking the international order. He also said that while an end to the fighting on the Russian side would mean the end of the war, an end to the fighting on the Ukrainian side would lead to the end of Ukraine.

The head of Ukrainian diplomacy, Dmytro Kuleba, called Russian aggression in Ukraine the biggest threat to world peace in the 21st century. He noted that he was speaking as the bodies of 445 people, in some cases only their parts, were being exhumed from a burial ground in Izjum. “Russia will never succeed in killing us all,” he said.

Russian Foreign Minister Sergei Lavrov arrived at the meeting about ninety minutes late. In a speech, after which he left the hall again, he repeated the Kremlin’s claims about neo-Nazis and Russophobes in Ukraine.

Among other things, he claimed that books are being burned in this country as in Nazi Germany, or that Ukraine is cracking down on “dissidents”, while talking about blocking the broadcasts of Russian television stations.

According to Lavrov, the West is pumping weapons into Ukraine in an attempt to prolong the fighting and weaken Russia. In this context, the minister spoke of the “military machinery of the collective West” and complained that Ukrainian President Volodymyr Zelenskyi is a cynic when he praises these modern weapons.

Among others, UN Secretary-General António Guterres and ICC Chief Prosecutor Karim Khan spoke at the RB meeting. Guterres described nuclear threats as unacceptable and criticized independence referendums announced in the Russian-controlled eastern parts of Ukraine, while Khan recalled the Nuremberg trials of Nazi criminals and the non-statutory nature of war crimes.