Interview with the municipality driver: We park on the sidewalk only on instructions. Some councilors want to take the wife away

I am one of the drivers of Prague municipal cars. Me and all my colleagues are really angry when our bosses, i.e. representatives or councilors and other people from the municipality we drive, talk about us in the media in the sense that we are the ones who park on the pavement and call us papalas . We get quite unflattering names from people around us. We are only drivers who follow the instructions of those we drive. Including Mr. Scheinherr, of course.

So do you only park on the sidewalk or no stopping if you are ordered to do so?

We always drop off or pick up representatives or councilors where they tell us. As a matter of principle, we are the ones who show our driver’s license, and I speak for my colleagues, so we would not park against the rules. Unless we are specifically instructed to do so. Then we get into a situation where we have to decide whether to disobey our employer’s order and fear for our job, or whether to actually park where we were ordered.

Describe exactly how it goes in practice when you drive municipality employees to a specific place?

When driving councilors, representatives and others, it is standard for the driver to stop at the address, drop off and wait for the person they are driving. Alternatively, if there is more time before the next trip, he can drive somewhere, but he must always be within a driving distance of a maximum of five minutes. When in a hurry, it is common, and some representatives will explicitly tell the driver to stop at the stop sign or on the sidewalk. I even know that some deputies and councilors wanted the drivers to pick up their children or take their wives with shopping.

At the beginning of the election period, Adam Scheinherr and other Prague councilors rejected official supers in droves, which was also heard in some interviews at the time.

This is another non-standard behavior for me. Some people, specifically Mr. Scheinherr, refused a personal driver, but got around it by ordering the same driver over and over again through dispatch. In essence, they had a personal driver, although they presented themselves as not.

Do you know whether the particular driver who parked on the sidewalk opposite the TSK building was punished in any way?

I do not know. But I don’t think he’s been punished in any way yet. 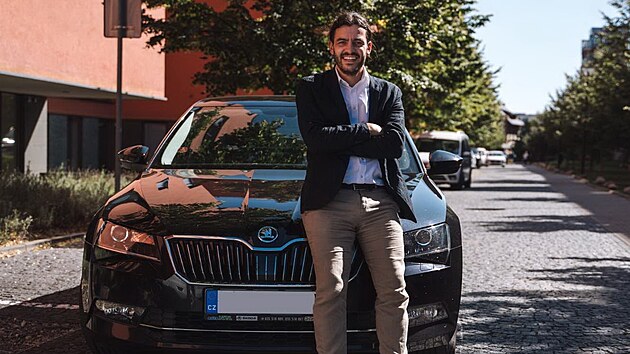 Adam Scheinherr with a black Superb

Is it true that after the case appeared in the media, you were banned from communicating with the media as a municipality driver?

In general, we have to solve everything within the municipality. Especially now before the election, it’s always been that way. Surely you understand that now no one dares to stick their head out and solve something.

How often do Adam Scheinherr or Jan Čižinský specifically use the services of drivers? Does this also happen on weekends?

Čižinský does not use a driver. Scheinherr and others can use drivers at any time according to needs and appointments. We have to be at the municipality all the time so that we are available when, for example, the schedule of meetings changes. The municipality has some twenty to twenty-five cars on hand. They also go on weekends, for various events. It also happened that we went to a meeting at a sports tournament on the weekend. I don’t know if it was really work, but it was normally on the calendar.

How did the municipality’s drivers accept the cancellation of the parking lot on Mariánské náměstí? How exactly does it work logistically? How do you pick up cars?

For me, this is complete nonsense, because now you have to look for parking spaces around the municipality in the side streets. Fortunately, our cars can park all over Prague, but parking in side streets was a complication. One has to catch up for the car. Therefore, they had to get used to the fact that the car is not at the entrance right away. But the problem is that the cars were scuffed and scuffed. You yourself probably know what the cars look like from parking in the center of Prague.

Was the public communication between Adam Scheinherr and Jan Čižinski about drivers parking like pigs addressed?

Well, I guess no one would like it if the bosses publicly addressed the work of the employees.

Adam Scheinherr claims in one of the posts that for four years he has been instilling in the drivers of the municipality that they should not behave in a stupid way. Is it true? For example, was there any training on this topic?

What is known among us is that Scheinherr made a point of being on time everywhere. So maybe he didn’t care much about speed. And I don’t remember him explicitly saying that we can’t park on the sidewalk. There was no such special training regarding papal behavior, and so far no one has officially told us not to park on the sidewalk at any training.