Mine them. Shevyakova, Kemerovo region, 1992 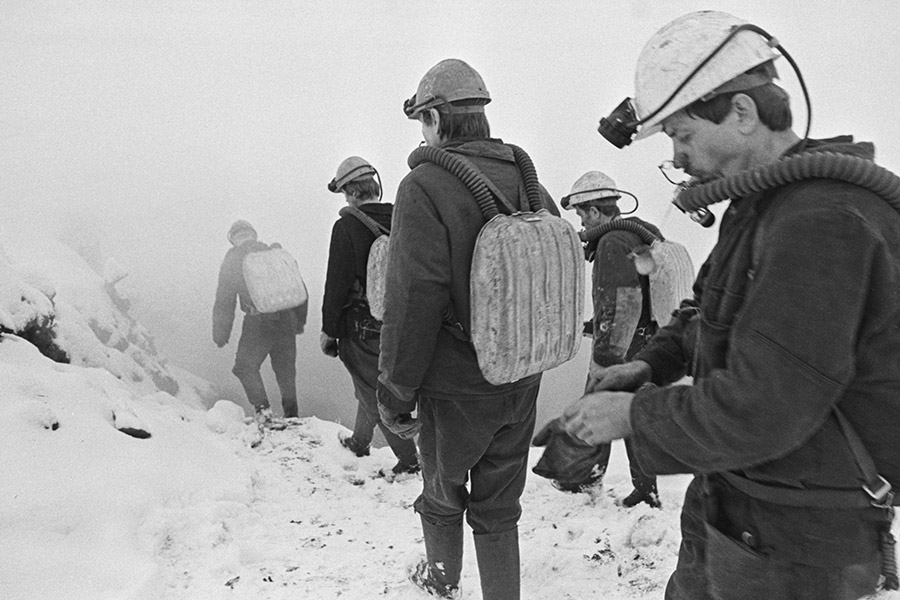 The methane explosion occurred on December 1, 1992. In the first days after that, only two dead were raised to the surface of the body. During the rescue operation, new explosions occurred. In 1996 on the surface of a mine opened memorial to the victims of the tragedy – the first dead miners in the modern history of Russia

On the picture: mine rescuers before descent 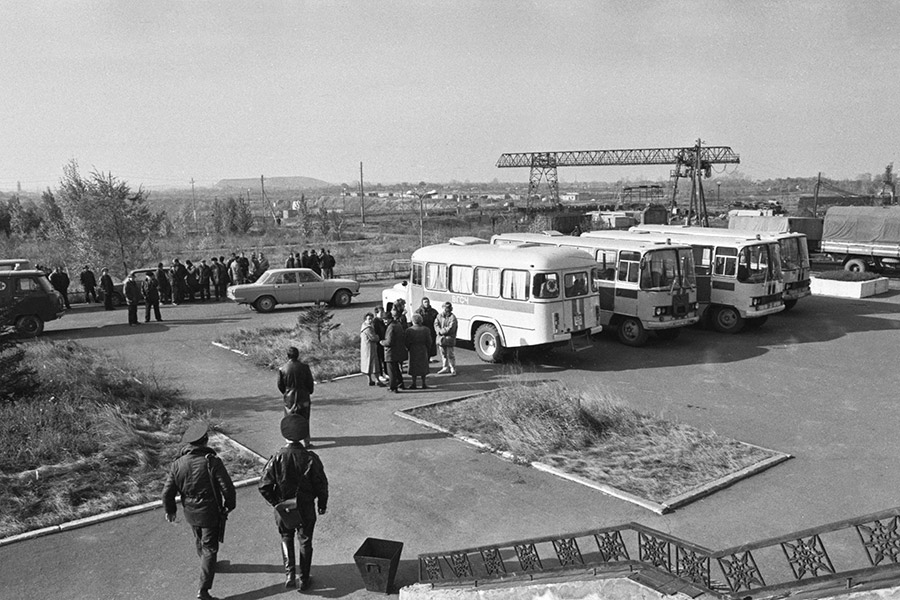 The ignition of coal dust on the conveyor belt led to a series of explosions at intervals of several hours. Most of the dead were rescuers who arrived at the scene of the emergency.

On the picture: Relatives of the miners and law enforcement officers at the scene of the accident 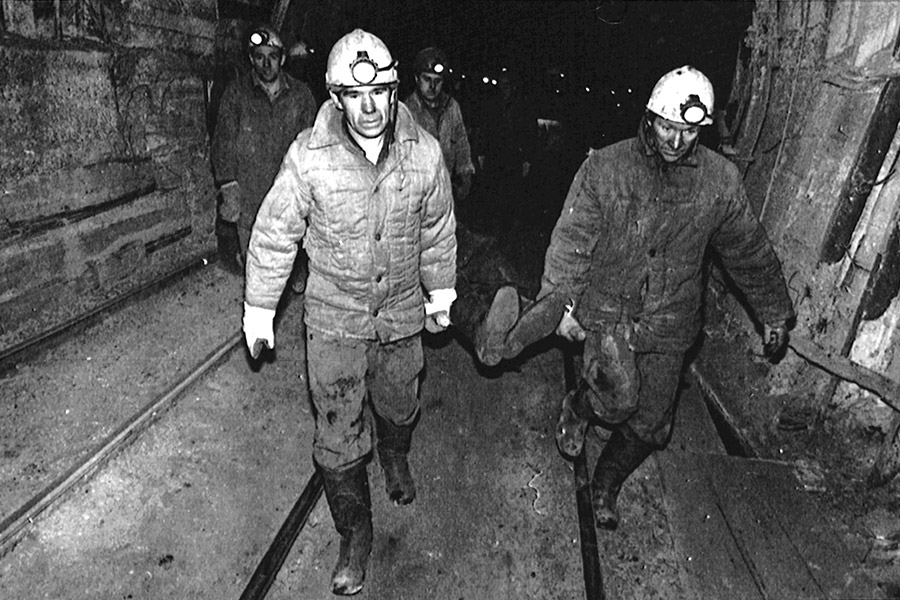 The explosion occurred on the night of December 2 during a change of miners due to safety violations. Methane accumulated in the mine, and the detonator became an abandoned self-rescuer (filtering respiratory protection), which crushed the combine: an oxygen-containing component spilled out of the self-rescuer and interacted with diesel fuel and coal dust. Punishment nobody did not carry

On the picture: miners carry the bodies of the dead along the ventilation shaft of the mine 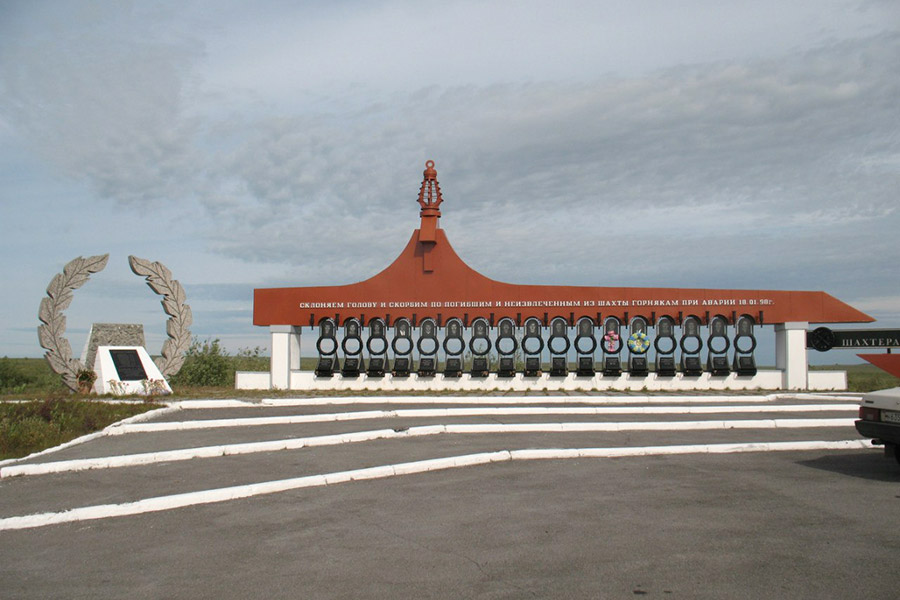 Underground fire in lava arose at a depth of 900 m, followed by an explosion of methane and coal dust. After the accident, the facility was closed, and the village of Promyshlenniy near Vorkuta, where the mine was located, was liquidated

On the picture: monument to miners 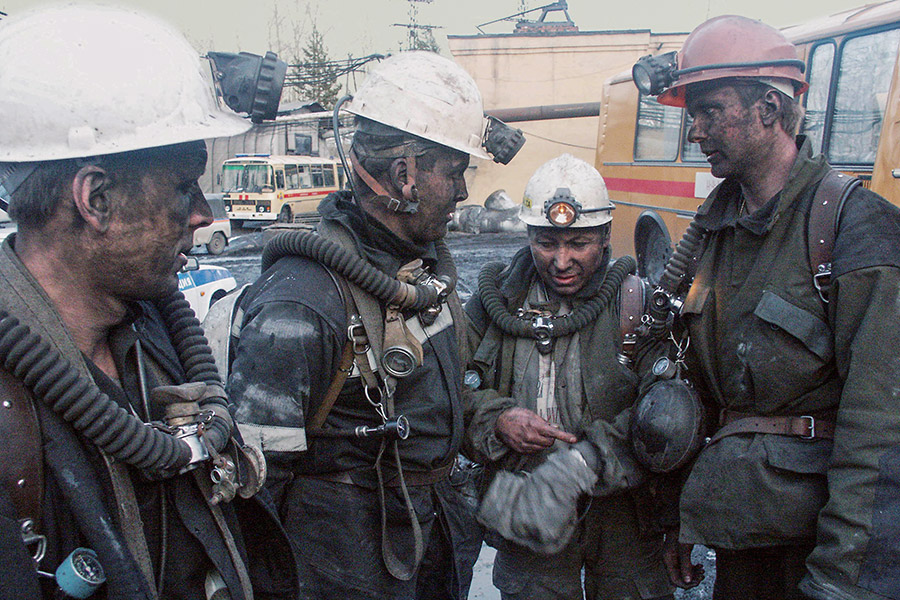 The explosion was caused by damage to the power cable due to the collapse of the rock and the resulting spark. In the same year, the prosecutor’s office stopped lack of corpus delicti

On the picture: rescuers after the underground watch 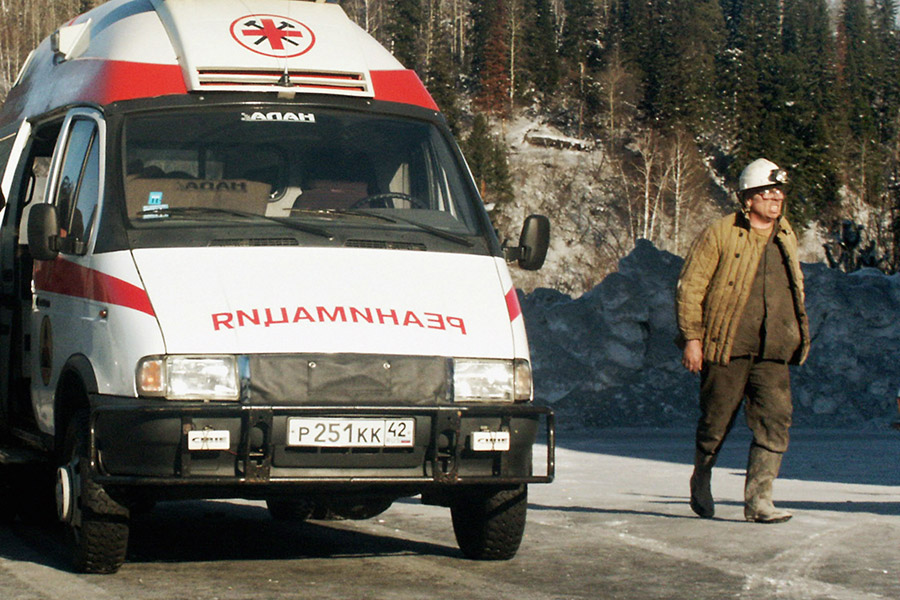 The explosion occurred during the liquidation of a fire in the worked-out part of the formation, when the concentration of methane sharply increased. Among the dead, 17 were mine rescuers 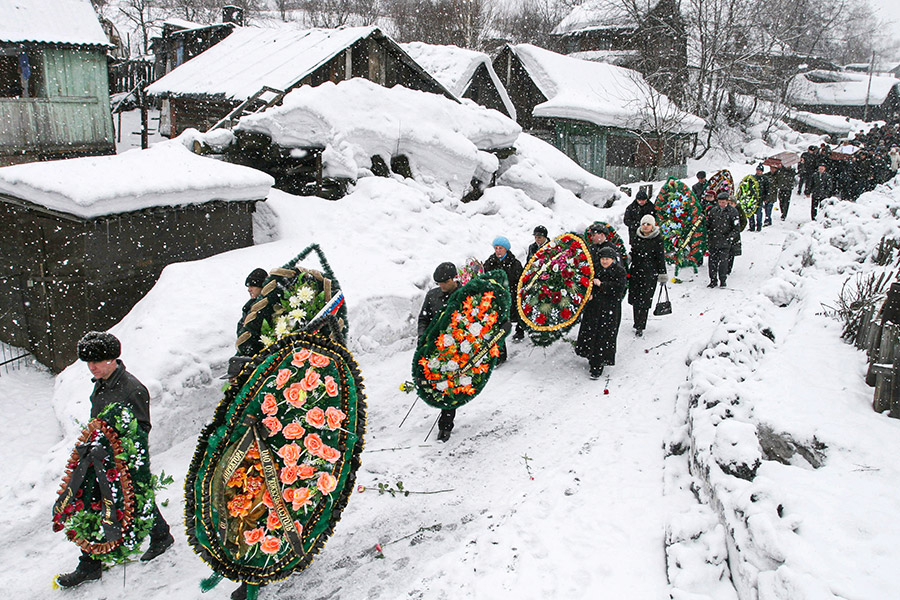 * The modern name of the mine in Novokuznetsk is “Uskovskaya”

On March 19, methane-air mixture and coal dust explosions occurred, 110 people died, 93 people were brought to the surface. According to the investigation, the tragedy occurred due to the ignorance of safety requirements. The mine had a gas control system that was supposed to turn off the mechanisms when the permissible concentration of methane was exceeded. Malfunctions were deliberately introduced into it in order to avoid emergency shutdowns and to extract more coal, the UK pointed out. In 2015, the defendants in this case, including the director of the mine, Andrei Funk, got up to six years in prison. In 2017, Vladimir Putin pardoned Funka

On the picture: funeral ceremony for one of the miners 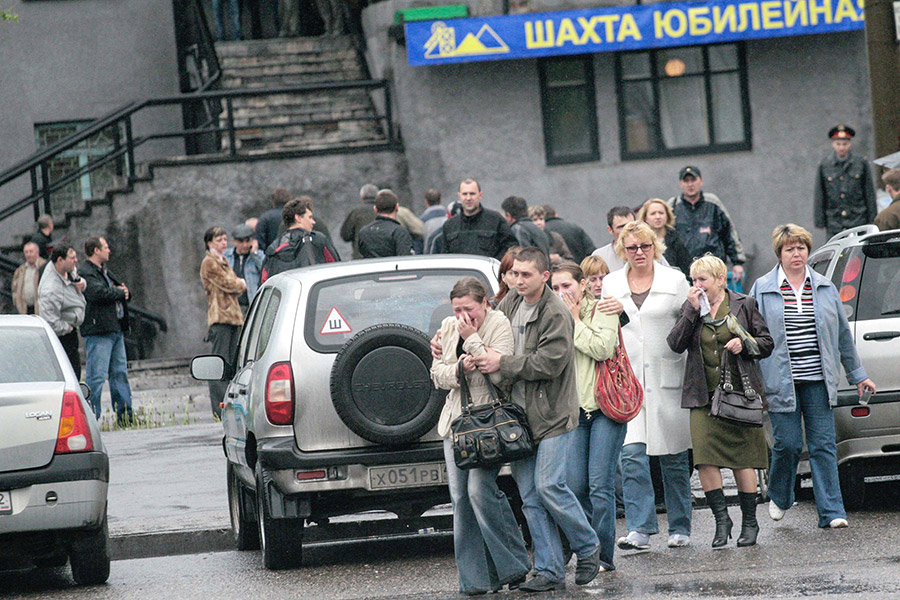 During the explosion, 217 people were underground, 38 died immediately, one more later died in the hospital. The reason was a short circuit, the commission of inquiry also found that the sensors that notify of exceeding the concentration of methane, were out of order… There was no information about bringing anyone to justice 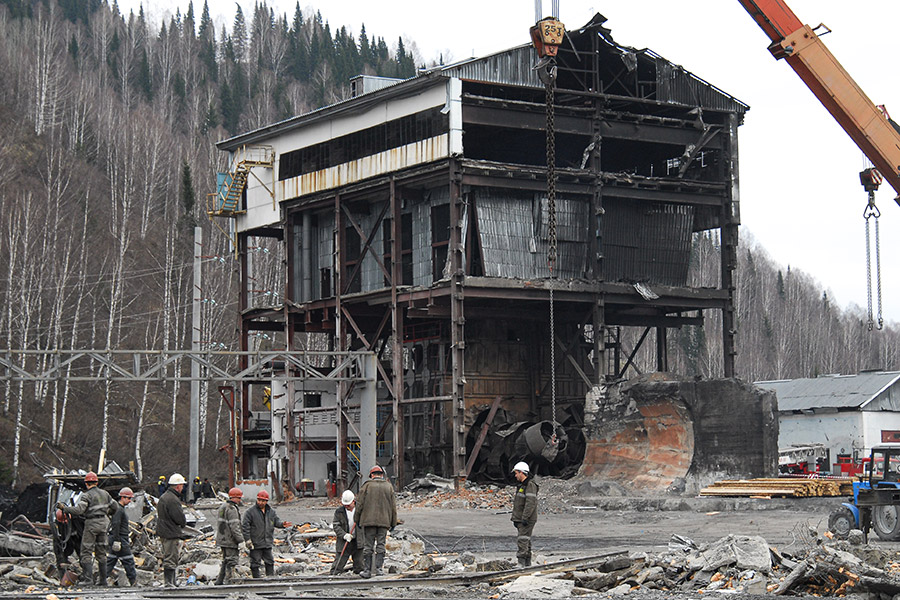 In May 2010, two explosions occurred at the mine, four hours apart. The second, more powerful explosion occurred when rescuers had already descended there. According to SK, ChP became a consequence of the desire to increase production: the safe level of production should not have exceeded 8 thousand tons per day per site, while in fact the level reached 21.5 thousand tons. In 2016, the investigation was completed, in 2020 the case shut down beyond the statute of limitations

On the picture: work to eliminate the consequences of an accident 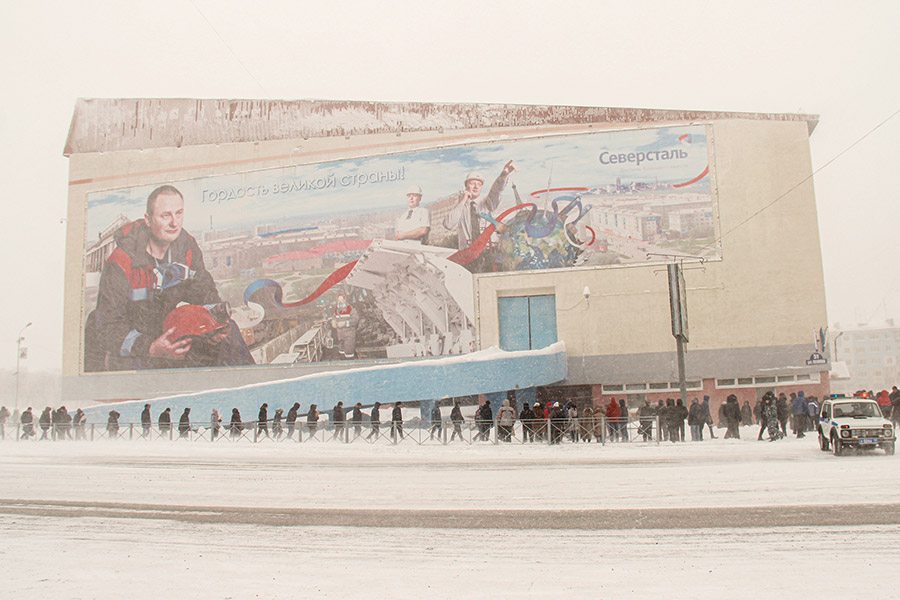 On February 25, there was a methane release in the mine and two explosions, a rock collapsed. First, the bodies of four dead were found, 26 people were listed as missing. A few days later, during the rescue operation, another explosion occurred, killing five rescuers and a mine worker. In early March, the missing were recognized as dead. Investigation ended in 2019, the UK concluded that the mine had been in breach of safety requirements for years. 14 people were accused in the case, including the leadership of Vorkutaugol. Judicial investigation started in October 2020.

On the picture: line for the farewell ceremony with the miners near the sports complex “Olymp” in Vorkuta