Marta Kubišová: I will not have a happy eighties

“I didn’t want to admit that there could still be a war. I hate the arrogance, the audacity. It’s something terrible. I experience it with television in such a way that I hope it makes me lose weight. It’s hard for me to bear it… I won’t have a happy 1980s, because it will definitely last at that time,” said the singer in front of a silent hall. “I say to myself, my God, I may not live to see the end of those people who have sinned.”

Most of Night with Legend, as the talk show with Marta Kubišová is called, was not so gloomy. The singer told one life story after another with charming immediacy. “I’m still stupid from the anesthesia, I hardly remember,” she apologized when she sometimes couldn’t remember a detail. This summer she ended up in the hospital in the operating room due to bowel perforation.

He doesn’t consider himself a star, he doesn’t take himself too seriously, and when he speaks, in style, what’s in his heart, what’s on his tongue. With an actress Iva Janžurová she recalled her “lifelong nightmare”. In 1968, she handed over to the then secretary in front of the building of the Central Committee of the Communist Party of the Czech Republic Alexander Dubček your lucky charm. The little angel was not in the box, it fell out in her car and the cute faux pas was immortalized by the cameras present.

To another of the guests, the Grand Master of Etiquette Ladislav Špaček, gave a little sermon on how her mom thinks a fork should be properly handled. “I still have a lot to learn,” Špaček responded appreciatively and made the audience laugh.

Cardiologist Petr Neužilwho took care of the singer after her heart attack in 2015, for example, revealed that she smoked twenty cigarettes a day from the age of 21. According to the doctor, after the heart attack, she went into herself and from being a fighter against communism she also became a fighter against traditional cigarettes when she switched to electronic ones, which are sometimes referred to as a “healthier” alternative.

During the two-hour conversation, Marta Kubišová also recalled the fact that she loved animals as a two-year-old girl. When they put her on a big elephant in the menagerie at the circus, she wasn’t afraid of him, on the contrary, she called him little elephant.

In 1962, at the very start of her singing career at an audition in Pardubice, she allegedly insulted the later famous composer Boban Ondráček. “There was a person sitting at the piano, I told him, you’ll allow me, I’ll play it myself. So I swept him out of there, but he didn’t think it was bad for me,” she said, adding that when she sang, the audition was over for the other tattooed ladies who were still waiting in the corridor. 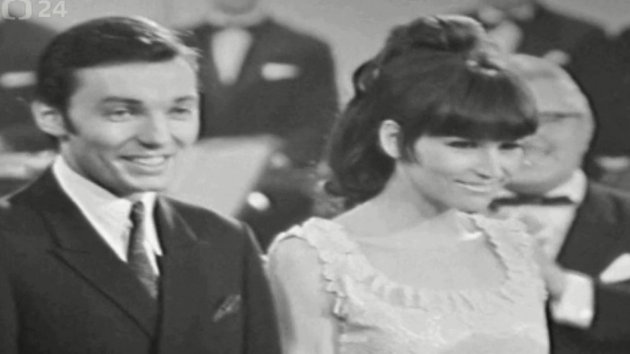 Footage from the Golden Nightingale from 1967 saw the light of day only in 2016.

At the beginning of 1967, she was to receive the first Golden Nightingale, so of course she decided what to wear. They prepared a dress for her in a fashion salon. She fainted when she saw them. “I thought to myself, I’ll be a good masquerader. A pink satin dress and a big bow on the knees,” she described. “And what did you end up wearing,” asked the presenter. “Well, that pink dress,” Kubišová made the hall laugh.

Host of the evening Lucie Křížkováwho stood in for a sick colleague Václav Copt, she didn’t have it easy at times. “While you drink, I’ll get back to that video…,” she told the singer at one point. “I don’t drink, I just wet my lips. Have a drink too,” Kubišová responded innocently with a Moravian expression and made everyone present laugh.

They also discussed the birth of the singer with the presenter Katerina’s daughter. “I saw photos of you washing diapers in the stream,” Křížková recalled. “That wasn’t a stream, that was Sázava,” Kubišová kindly corrected her, which again amused the audience.

“It would take a little Praying Man…”

“I went into exile voluntarily. Everyone said: If you recognize the regime, if you sign this, you will be singing within a week. But I didn’t want it that way. I wouldn’t be happy about it at all,” says the singer, whose cowardly comrades never told her face that she had been banned. They allegedly let her know through a colleague Václav Neckář.

In 1971, he was forced to leave the Pragokoncert, then he also left the Prague Cultural Center (PKS) and found refuge in the north of Bohemia with the group Bacila. “Vasek was a little more suicidal. He said that he was in Ústí and that he could invite whoever he wanted to a concert there. I told him: Well, you’re a suicide, they’re going to ban you,” Kubišová recalled, who at the time was gluing bags, then assembling toys, and subsequently joined the company Výstabba sídlišť as a typist. 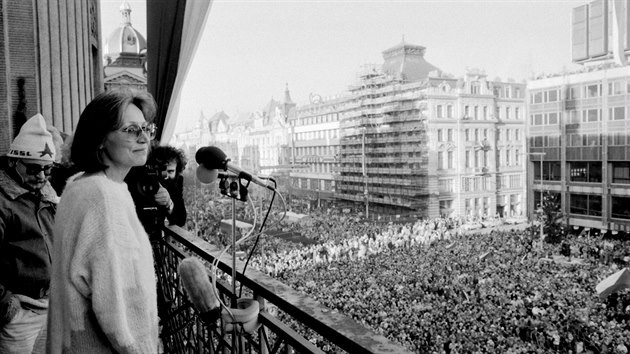 Marta Kubišová spoke on Human Rights Day on December 10, 1989 at a demonstration on Wenceslas Square.

At the end of December 1976, she signed Charter 77. In the fall of the following year, she became one of its spokespeople. She says she never wanted to emigrate. The fact that she is not allowed to sing did not upset her in any way. “You have to do something for a living. I enjoyed it. When I got bigger rewards in Housing Development, I was able to buy the most expensive dog that was available here,” she said.

She celebrated her 47th birthday in early November 1989. Little did she know then that the fall of the regime was in sight. Three weeks later, she stood on the balcony of Melantrich on Wenceslas Square and hundreds of thousands of people chanted her name. “Jirka Cerny he pushed me out there, just breathed in my ear: It would take a little Praying Man. I haven’t sung it like this in public for twenty years. At that moment, I didn’t know what to do. I really wasn’t ready for that,” she admitted.

She returned to her career as a singer and sang the Prayer for Martha many more times. “I usually ended the concerts with a prayer,” she says. “And what did you feel when you sang it?” asked the presenter. “That it’s over,” answered Kubišová, and this conversation on Thursday evening was tearing up the hall.

Five years ago, on his 75th birthday, she sang goodbye in České Budějovice. After that, she performed occasionally, but you can see how happy she is that she no longer has to make a living from singing. Perhaps also due to the fact that her knees hurt when she stands on stage for a long time.

“A rare woman told me: Just don’t think that when you retire, it’s going to be a bad thing. I found out that I am actually still in permanent employment. When a journalist doesn’t ring, someone rings to say that their dog is lost and what to do to find it. Something else. I’ll probably rest under the flowers,” adds Kubišová. At the end of the evening, the notes of the famous Prayer rang out and the singer couldn’t resist. She sang a bit of the song with the audience, which gave them a standing ovation.

The autumn tour Noc s legendou will continue on October 15 in Nymburk, on October 22 Marta Kubišová will perform in her native České Budějovice and on October 29 she will end her birthday tour in Kladno.