The first worksheet included geometry, geometric series, spatial geometry, probability calculus, graphs, sets, and the second part included tasks on the depreciation of new cars, school-to-girl ratios, and viticulture, which required graduates to deal with spatial geometry. and had to be familiar with statistical concepts. 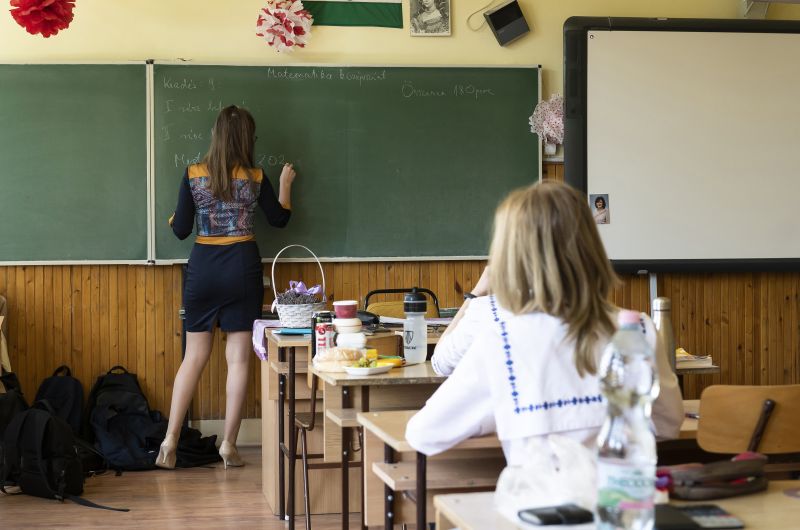 A teacher writes the information on the board at the intermediate level written mathematics graduation exam at the Zrínyi Ilona High School in Nyíregyháza on May 3, 2022.
Photo: MTI / Attila Balázs

Péter Horváth, the director of the Miklós Révai High School in Győr, told MTI that the series of tasks was not difficult, and this year there were no unexpected tasks that would have been difficult to prepare for.

The first and second parts of the task list also contained examples that had already appeared in recent years, so if someone had solved the task sets of the last 4-5 years, they had already met them, he added.

Péter Horváth finds it difficult to imagine that many people will not achieve the double grade, and according to him, many people across the country will achieve results above eighty percent.

According to Ákos Zoltán Bottlik, the director of the Székesfehérvár Vocational Training Center János Vajda Technical School, the task series could also be solved for the majority of the students.

According to the teachers of mathematics working in the Bicske institution, the first part of the task series was easier and the second half more difficult than expected, but overall, none of the tasks were found to be unrealistically difficult and unsolvable.

Ms. Tamás Komoróczy, a teacher at the Pál Vasvári High School in Nyíregyháza, told MTI that the graduates were given a “very fair and friendly” task. The definition of the tasks took into account the difficulties of online education ordered due to the coronavirus epidemic, and for someone who properly mastered and practiced the tasks of the mathematics material, it was a good compilation, he thought.

Reporting on his experience, he said that in the first part of the exam, graduates were given easy-to-understand, standard assignments, but students found the geometric and vector examples difficult. The educator found it very favorable that the statistics generally popular among the students appeared in several places among the tasks, and called it good that the volume, probability and surface calculations were published in the long series of tasks.

The tasks in the second part of the exam were not complicated, the 16th grading required the most careful recognition and application of the arithmetic and geometric series from the graduates, said Tamásné Komoróczy, adding: the students she interviewed found the this year’s math set.

László Molnár, the director of the Katalin Varga High School in Szolnok, called his intermediate mathematics graduation fair. There was no unexpected task in the first part that could have caused panic among the students, and even those who did not solve them completely could score points in the more difficult tasks in the second part, he said.

In his opinion, the set of tasks covers the contents of the graduation information, there was a task from each of the given topics, the proportions also corresponded to the previous graduation rates. The students did not complain, they did not seem desperate, he added.