The Dutchman Mathieu van der Poel won the opening stage between Budapest and Visegrád on Friday at the Giro d’Italia road cycling race, the first three stages of which will be held in Hungary. Attila Valter became the 29th best Hungarian. 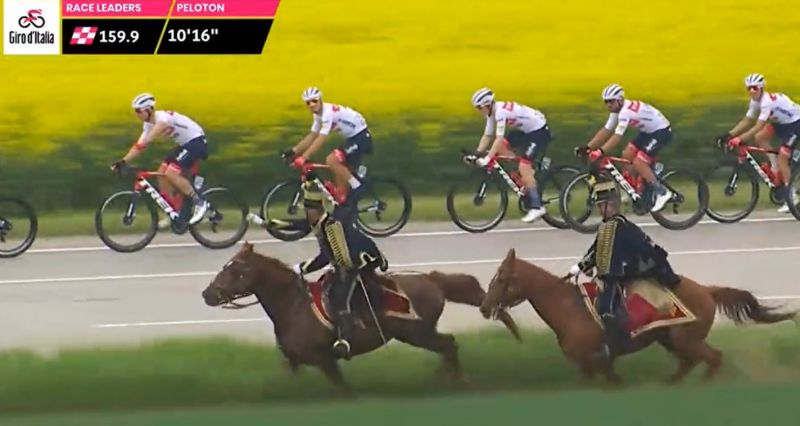 During Friday’s 195-kilometer distance of 900 meters in Székesfehérvár and Esztergom. Immediately after the sharp start, the “zero mile”, Drone Hopper-Androni Giocattoli’s two cyclists, Mattia Bais and Filippo Tagliani, ran into everyone, so the teams let go of the two fugitives for almost 11 minutes.

In addition to the roads, the Hungarians were encouraged and greeted the field: Barnabas Peák was motivated by a molino posted on the overpass, the Hungarian bikers and the international stars were encouraged by the inscriptions on the asphalt. But there was a fan spinning in a T-rex costume, others in pink uniforms galloping on horseback next to the field, and at Martonvásár, hussars galloped with a drawn sword on a short stretch accompanied by cyclists.

The Giro d’Italia is not just about cycling: it’s about folklore, tradition and lots of fun

Leaving Esztergom, 14 kilometers ahead of the finish line, the two Andronis riders caught up, and the success of the stage was decided on the fourth category ascent to the Visegrád Citadel, as expected. At the 338-meter-high finish, cyclists with a five-kilometer-long average slope of 5 percent and eight percent in some places awaited cyclists.

First Lawrence Naesen from Belgium and Lennard Kämna from Germany started their long hair, but finally the double Eritrean champion of Ghent-Wevelgem, Biniam Girmay and the Dutchman Van der Poel, who won the Flanders race for the second time this year, competed for the first place. one of the best sprinters, Caleb Ewan, fell in the finish line. In the end, Van der Poel proved to be the fastest, so with his victory, he was the first to put on a pink leotard for his complex lead at this year’s competition.

With his success, he was also able to take over the cyclamen, who is at the forefront of the points race, and the blue leotard for the first place in the mountain points race, at the end of which he did not regret splashing champagne on photographers. The Dutch cyclist highlighted at the press conference that he had to fight for his position.

“In the end, however, everything went well, I started my hair at the right time, so everything is perfect,” he said with satisfaction.

He pointed out: it was a typical uphill sprint run when the end hurt a lot. He said all about the previous one – and as a young man in a white leotard – that the winner of the Ghent-Wevelgem can only be a strong rival, he is well placed, so he will continue to be a serious opponent.

Van der Poel revealed that it was a difficult situation that everyone treated him as a clear chance for a stage success, but he was already in a similar situation.

Recalling that, he wore the yellow jersey for six days on Touron, his first Grand Tour, last year, which touched him emotionally because of his grandfather, Raymond Poulidor, who, although eight times on the podium in the French circuit, could never wear the most valuable distinctive jersey in cycling. And the fact that her second three-week start had a good start right away, and so she had a chance to take on Maglia Rosa, was an extraordinary motivation for her.

Looking ahead, he said, of course, he wants to keep his first place for some time to come, but if 2017 winner Tom Dumoulin, who was seen as a great chance in Saturday’s time trial, also takes the pink jersey from him, he has already achieved what he set as his goal.

Attila Valter, along with the best, finished 29th four seconds behind the winner. Due to the time credits for the top three, he expects a 14-second disadvantage to continue on Saturday.

Of the other two Hungarian starters, Erik Fetter fell into the fall before the ascent, finishing in 112th place with a 2:22 minute lead, while Barnabás Peák was 167th, 5:33 minutes behind the winner.

On Saturday, another stage in Hungary, the 9.2-kilometer individual time trial in Budapest, will start, starting at Heroes’ Square at 2 p.m. The 105th Giro d’Italia will cover a total of 3,445.6 kilometers until it reaches its finish line on May 29 in the Verona time trial.

Rockets have been bombed at a railway station in Ukraine, with fatalities

After their release, those accused of public breakfast are waiting for a call that determines their fate, and this is the story of the girls’ search