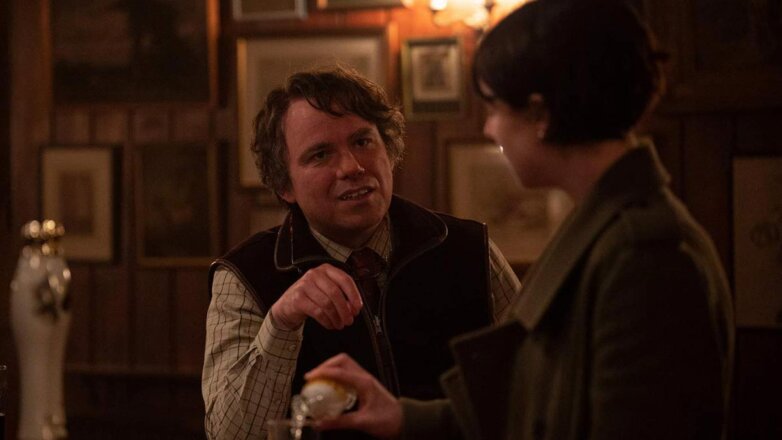 The novelty of the fashionable American studio A24 unexpectedly reached Russia – “Genus male”. In the original simply Men, “Men”. It seems that A24 were going, following the example of the rest of Hollywood, to stop the distribution of their films in our country, but then they changed their minds (hopefully not temporarily).

No less important, the director of The Male Gender, Alex Garland, is also recognizable – otherwise the film would hardly have premiered at the Cannes Film Festival in May this year, as part of the main parallel program of the show, Directors’ Fortnight. Garland initially became famous as a writer (the novel “The Beach”, filmed by Danny Boyle) and a screenwriter (pictures of the same Boyle “28 Days Later” and “Hell”). Only later did he try directing and immediately established himself as one of the most interesting directors of philosophical fiction with his recognizable, stylish and concise visual style.

“Invisible World”: school as a reflection of cruel reality

The range of topics that interest Garland is wide and global: for example, they include artificial intelligence (“Ex Machina”) and evolution (“Annihilation”). But, what is valuable, he is no less concerned about human feelings, therefore the living in the director’s works always breaks through the thickness of big ideas and cultural references. Garland is also amazingly able to depict nature – pantheistically animated, mystical. All this is also in the “Kind of men”.

Harper, the protagonist of The Male Family, is played by Jessie Buckley, an Irish actress with whom, through her filmography, something disturbing and gloomy is associated. Buckley played the wife of a firefighter dying of radiation sickness in the TV series Chernobyl and the girlfriend of the hero of the most depressing film of recent years, Charlie Kaufman’s Thinking of a Finish. In general, Buckley is ideal for the pictures of Alex Garland – certainly not the most optimistic director.

The heroine comes to a very beautiful secluded house in an idyllic British province, where she plans to mentally move away from a traumatic experience. A person who has seen at least a couple of horror films in his life immediately understands that the girl does not expect anything good in the near future. And indeed: soon a naked, covered with wounds, homeless man begins to pursue her, who is caught and then released from the police station (they say, he will appear again – call. In other words, when there is a corpse, we will arrive). The local priest first comforts Harper, and then accuses her of all sins. The little boy, in response to refusing to play with him, calls her the very last words. And the owner of the house, a typical village dweller, seems rather strange. The most amazing thing is that all the local men, upon closer inspection, have the same face – the face of actor Rory Kinnear. But for some reason the heroine does not notice anything. And this is just the beginning of all the hell that will happen in the film: the denouement to Alex Garland, the master of bright and not always pleasant visual images, was a success.

“Wolf”: a story about a parrot girl, a shepherd boy and a wild cat

On the example of the “Male Gender”, saturated with a mass of symbols and metaphors, mythological and religious references, it is convenient to demonstrate how different optics allow us to analyze the work in different ways, to focus on its various facets. Garland is well aware that everyone always sees something different in films, and therefore he deliberately cut out the pre-final scene, which could have made his personal explanation of events a little clearer.

After the pre-premiere screening in Moscow, the film was discussed with an analytical psychologist based on the work of Carl Jung and the theory of archetypes. From his point of view, the central theme of “The Male Family” is the living of grief and the splitting of one image into many small ones, so that the human psyche can cope with the heavy burden that has fallen on it. The need for this residence, from which you can’t hide, no matter how much you want to. Already in the first frames of The Male Clan, we see how a man flies in slow motion in front of the heroine’s window in a big city. Subsequently, it turns out that this is her husband James (Paapa Eciedu), with whom she had just tried to break up. He either committed suicide, or accidentally fell out of the window and crashed to death.

Such an interpretation has the right to exist, but with the caveat that Harper is hardly truly grieving over the loss of her husband – her trauma is more likely to be associated with shock and imposed guilt. James threatened his wife with suicide if she left him, and before parting, he also hit her. Pushing her husband out the door, Harper seemed to breathe new life into herself, but the anticipation of joy turned out to be surprisingly short-lived. As short-lived as the happiness in the village, when the heroine found an abandoned railway tunnel, and the echo from her melodious voice filled its vaults, turning into a choir – as if saying that she alone was enough. Immediately after that, a mysterious stranger with bad intentions appeared at the other end of the tunnel.

It is more logical to perceive “The male race” as a parable, a cinematic concentrate. Women are blamed for the fall of man (Harper unambiguously bites off an apple from the garden at the beginning of the picture), women are seen as a threat (the priest quotes Yeats’ sonnet with words about the death of Agamemnon). The vicar himself says that he is the Swan, that is, Zeus – who mastered Leda in this image, as a result of which the future wife of Tsar Menelaus Elena was born.

Harper’s husband James is also likened to a god in the picture, but already a Christian: he is almost crucified, disfigured by falling on the fence – but this is precisely the point of view of the male character on himself. In the end, Harper will also end up in a confrontation with the imaginary god.

Like Annihilation, The Male Gender is not least a picture about love. Only if “Annihilation”, behind all the plot riddles, is fraught with a story that two people must evolve synchronously in order to maintain love, then “Male Gender” is a story about self-love.

Spiritual path 2.0. How to identify a Tibetan Buddhist in a minibus? – Good deed – Saint-Petersburg News