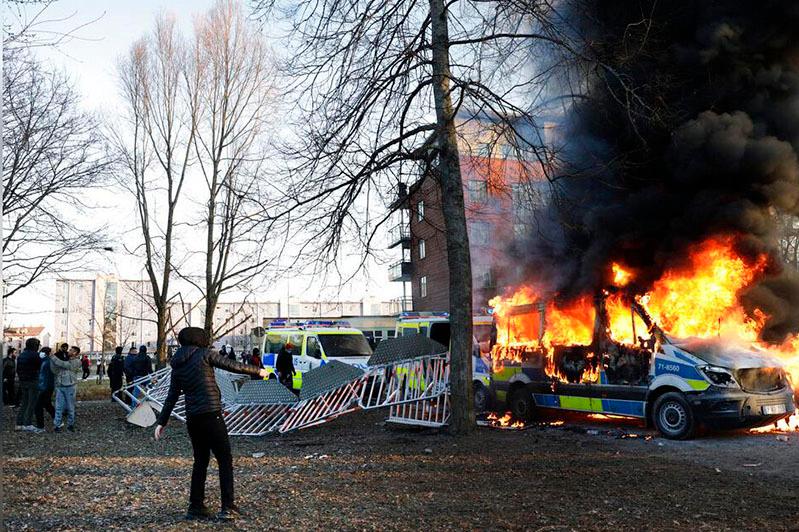 BRUSSELS. KAZINFORM During the Easter holidays, riots took place in a number of cities in Sweden, connected with a provocative action by an ultra-right group, Kazinform’s own correspondent reports.

On the fourth day clashes take place in the Swedish cities of Linköping, Norrköping, Stockholm, Örebro, Malmö and Landskron. The riots began after far-right politician Rasmus Paludan, who leads the anti-immigrant Stram Kurs (Hard Deal) party, publicly burned the Muslim holy book of the Quran on Friday and said he would do it again in other cities in Sweden.

Some 100 opponents of Stram Kurs started protests, including throwing stones at police officers and setting fire to cars, tires and trash cans, according to Swedish police. As a result of the riots, 16 policemen were injured, 25 people were detained.

On Sunday, at 11 p.m., the police were again forced to disperse protests in one of the districts of the city of Malmö, where several fires were set. In addition, the police were greeted with intense stone-throwing, firecrackers and fireworks.

“We are describing this as a violent riot,” police spokesman Patrick Force said.

Meanwhile, the unrest in Sweden caused an international outcry. Local newspaper expressen writes that in connection with the incident, the Iraqi Foreign Ministry summoned the Swedish Ambassador to Baghdad. Iraq says the incident could have “serious implications” for relations between Sweden and the Muslim world.

The main thing about military operations in Ukraine by the evening of April 17. “Paper”

The world is moving into a new reality