Scientists recently obtained the first image of our galaxy’s central black hole (Sagittarius A*). How did they do it? Is it true that there are telescopes the size of our planet and even more? And is it possible to see a matchbox on the Moon from Earth? Naked Science details one of the most impressive technologies for exploring the universe. 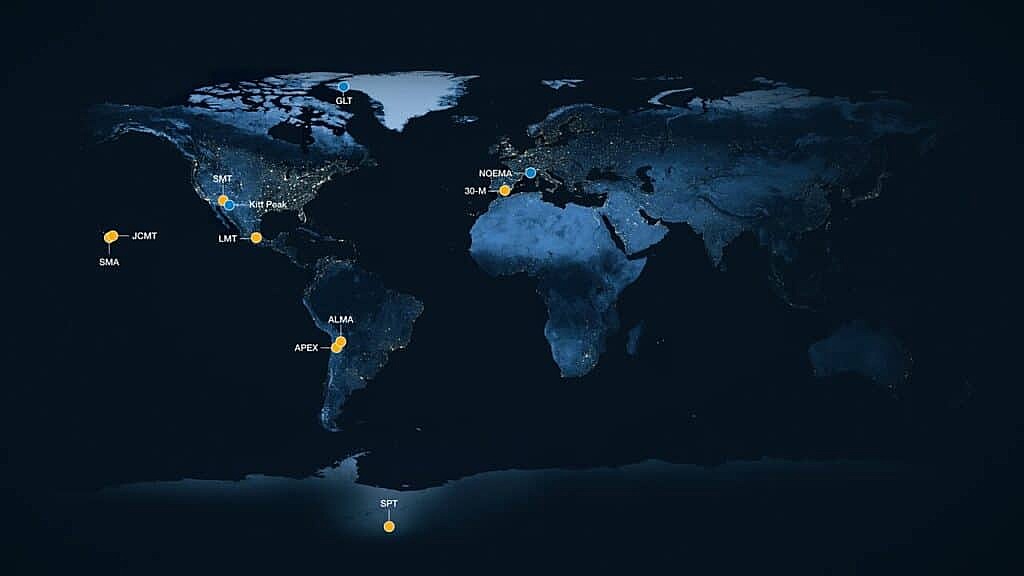 The achievement belongs to the same team that in 2019 published the sensational image black hole at the center of the M87 galaxy. The scientists again used a network of eight radio telescopes scattered from Spain before Chile and Antarctica. This network worked as a single telescope, comparable in size to the Earth. This cyclopean instrument is called the Event Horizon Telescope (EHT). It is almost able to see the event horizon of a black hole (its conditional “surface”), hence the name. Almost – because in fact there is a slightly wider area, the so-called shadow (the zone from which the black hole, so to speak, removes photons).

The grand instrument received an image with a resolution of 20 microseconds of arc. An optical telescope with this resolution could, from the Earth, make out a matchbox on the Moon, not like an astronaut’s boot print. It is a pity that such optical telescopes do not exist.

But there are such radio telescopes (and even sharper ones). True, they are not studying traces of astronauts on the moon, but black holes, distant galaxies and natural space lasers (more precisely, masers). But this, you see, is no less interesting.

Systems that bring such amazing results are called interferometers. Let’s see how they work.

Look into the night sky. How dim can you see stars? Now look at the moon. How fine details do you see? So you got acquainted with the two main characteristics of an astronomical instrument: sensitivity and resolution. The first is about the ability to highlight weak objects from the background. The second is about the ability to see the fine details of bright objects. It is clear that astronomers are interested in “both that and the other is possible without bread,” but in this article we will talk about resolution.

How is it measured? When we look at a distant object, our eye is at the top of a triangle, the base of which is this very object. This is illustrated below (the scale is distorted with particular cruelty).

The angular resolution of the human eye is about one arc minute. This means that a person with perfect vision can see an object 30 centimeters in size from a kilometer distance.

Note that to improve resolution, the minimum angle δ must be reduced, not increased. The smaller it is, the more subtle details we distinguish. If this angle were ten times smaller, we would have seen a coin from a kilometer distance.

What determines the resolution of a radio telescope? The answer is given by a simple approximate formula (let’s hope that it does not halve the number of readers of this article, which is what publishers traditionally scare popularizers with). Let λ be the radio wave length and D the antenna diameter. Then the resolution δ (in radians) is:

This means that the easiest way to reduce the angle δ and thereby increase the resolution is to enlarge the telescope. Radio astronomers, given them free rein, would turn the entire universe into an antenna, after which they would have nothing to observe. However, the reality is cruel: structures that are too large are not technically viable. The largest operating radio telescope is the Chinese 500-meter FAST, but it does not use its entire area.

What resolution does this giant provide? It is easy to calculate that with a minimum wavelength of 10 centimeters for it, the resolution is … on the order of an arc minute. Half a kilometer giant, a marvel of engineering, distinguishes details no better than the naked human eye!

Of course, this is a sly comparison. Optical and radio astronomy complement each other, but cannot replace each other. This is so, if only because not all cosmic radio sources also emit light, and vice versa. And since the eye does not perceive radio emission at all, then there is no need for it to turn up its nose in front of honest antennas (although wait a minute, where is the nose of the eye?). And in general, what to do if ten-centimeter radio waves are hundreds of thousands of times longer than light waves?

Scientists, however, are keen to do something about it. Therefore, at the dawn of radio astronomy, they came up with interferometer telescopes.

The simplest interferometer consists of two antennas that work as one: the signal from them is added or (more often) multiplied. They can be wired or simply recorded with precise timestamps so that signal multiplication can be done after the fact.

What is so good about it? The fact is that the angular resolution of the interferometer is also described by the above formula, only by D in it you need to understand the distance between the antennas. The segment connecting the antennas is called the base of the interferometer; it is clear that the distance between them is the length of the base. In addition to length, the orientation of the base in space is also important.

What happens? Let’s space two telescopes a thousand kilometers apart – and get the resolution, like a fantastic, impossible thousand-kilometer antenna? 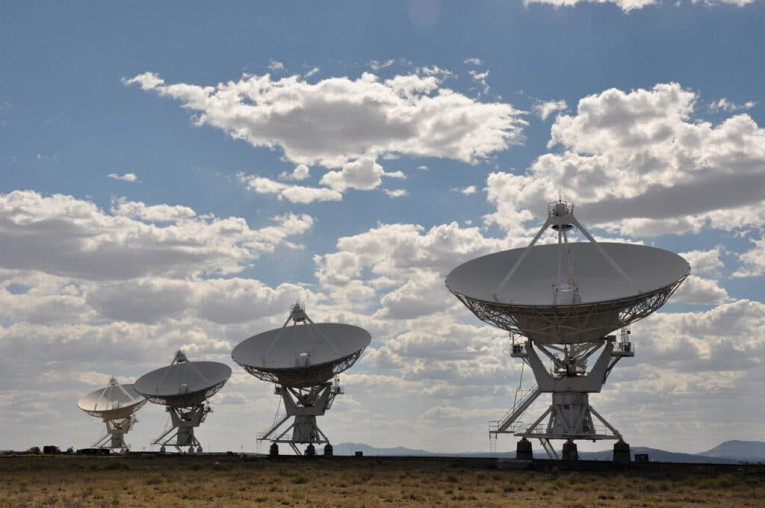 In fact, alas, everything is more complicated. Telescopes can and should be smashed (the main thing is not to smithereens), but the effect of this will be somewhat less impressive.

The fact is that an interferometer with a base length D receives only part of the information that goes to a solid antenna with a diameter D. For mathematically savvy readers, let’s clarify: an interferometer with a single base reads the only Fourier harmonic of the spatial distribution of brightness (at a frequency depending on the length and orientation this base). If this sounds to you like “the interferometer reads only one sepull of tiryampampation”, do not despair! The main idea is simple: to build a complete image, you need all the sepules, of which there are many. And the interferometer of two fixed antennas (and, therefore, with a single base) gives only one. Let it be exactly the same as that (among others!) Would give a huge antenna of diameter D.

Sometimes this is enough. For example, if the observed object is a tiny point, and the task of the interferometer is only to determine its position in the sky as accurately as possible. But more often, no. To figure out what a complex object looks like, astronomers need more information, which means more bases.

This can be arranged. First, who said that there can only be two telescopes? The largest interferometric network European VLBI Network includes 24 antennasscattered from Japan to Spain and from Finland to South Africa. By the way, it also includes the Russian Kvazar network with antennas in the Leningrad region, Karachay-Cherkessia and Buryatia. And each segment connecting any two telescopes is the base of the interferometer.

Secondly, the antennas can move relative to each other, changing the length and orientation of the base. This is how the American system works. VLA. Twenty-eight “plates” are on the rails, and if necessary, they are moved by a special tractor.

You can combine the two approaches by making several fixed antennas and one movable one. It is especially tempting to launch a mobile telescope into space in an elongated orbit. At the maximum distance from the Earth (at apogee), the satellite will provide the interferometer with a huge base. As it moves around the planet, the base will change in both length and orientation.

This is exactly how the most vigilant telescope in the world, the Russian RadioAstron, worked. Its space part was the Spektr-R artificial Earth satellite with a ten-meter antenna on board. Launched into space in 2011, it stopped functioning in 2019, having worked much longer than expected. During this time, Radioastron observed about 250 space objects and accumulated four petabytes of data. They are processed and interpreted until now.

By the way, the launch of a ten-meter radio telescope into space was a record in itself. But Spektr-R did not work alone. Practically all operating radio telescopes suitable for the wavelength (almost 60 pieces) acted as a ground arm at least once.

Radioastron is not the first ground-space interferometer, but it has broken all records in terms of base length. The maximum base was 350 thousand kilometers, which is almost equal to the distance from the Earth to the Moon. Not surprisingly, this instrument made it into the Guinness Book of Records as the largest telescope in history. The resolution on this base was 8 microseconds of arc – an absolute record not only in radio, but in general in astronomy.

By the way, why the record? What’s stopping us from getting an even bigger base? Let’s launch the telescope not around the Earth, but around the Sun! And let the distance to it be like to Mars, no, like to Jupiter, no, like to Voyagers!

Alas, it won’t do anything. The fact is that you have to pay dearly for high resolution. A radio telescope, whether it is an interferometer or not, does not survey the sky with a master’s eye. At the same time, he “sees” only a tiny piece. How tiny? But just with an angular size equal to the resolution.

What is the risk? The flame of a candle is as bright as the flame of a large torch. But it is smaller in size, so there is less light from it. Through a narrow slit one can see only a small piece of the Sun’s disk, and how much light will there be from this slit in a dark room? It’s the same story with radio waves. If the angular resolution is too high, the signal from the cosmic radio source will become indistinguishable in the background noise.

This problem can be circumvented by increasing the sensitivity of the telescope. But sensitivity, unlike resolution, does not depend on the size of the base. To increase it, you still have to take a larger antenna. And it is difficult to launch large and massive devices into space, the limitations of launch vehicles already affect here.

However, the future of interferometry is not only in space, as the EHT network shows us. New tools are gradually being added to it, so even more detailed portraits of black holes can be expected soon.

Another possibility is to build systems with modest resolution by the standards of interferometers, but gigantic sensitivity. So, last year the construction of the SKAO (Square Kilometer Array Observatory) network began. The maximum base will be measured “only” in tens of kilometers, but the total area of ​​hundreds of thousands of antennas will exceed a square kilometer!

In general, although an instrument with an Earth-Mars base is not yet foreseen, the potential of the technology is far from being exhausted. Interferometers will continue to closely examine the Universe, and we will rejoice in the flow of scientific discoveries.

The State Duma announced that they would not block Telegram. “Paper”

Pushkov revealed the true meaning of Biden as US leader