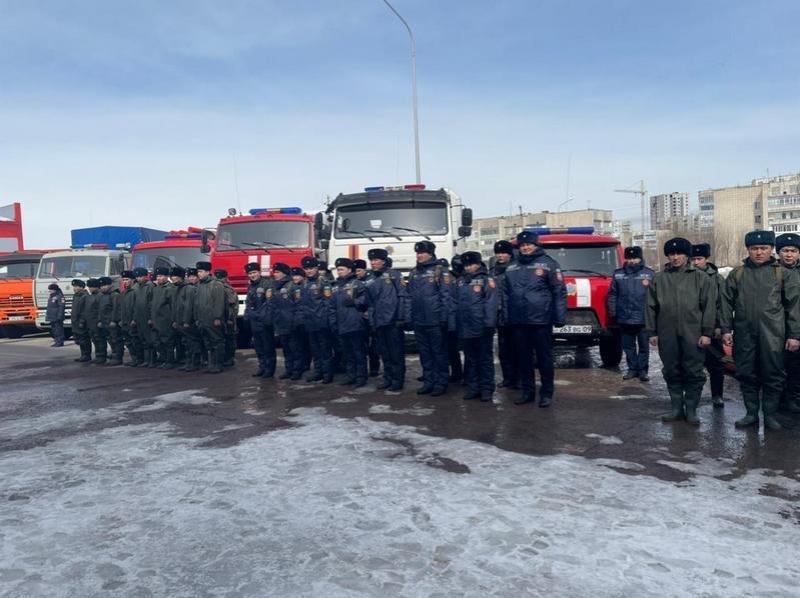 KARAGANDA. KAZINFORM – 158 flood-prone settlements are under control of the Department of Emergency Situations of the Karaganda region. There are currently no serious floods and overflows on the roads in the region. The peak is expected from April 5 to April 11, Kazinform correspondent reports.

According to weather forecasters, starting from April 4-5, there will be a sharp warming in the region. An increase in air temperature can provoke flooding of a number of settlements. This was announced at a briefing on the platform of the Regional Communications Service by the head of the Department of Emergency Situations of the Karaganda region Murat Katpanov and the head of the hydrology department of the Karaganda regional branch of the RSE “Kazhydromet” Ilyas Seytkaliev.

“Sharp warming is expected in the region. Starting from April 4-5, we will have a positive temperature at night – from 0 to +5, and in the daytime – from 5-10 degrees Celsius. In some places, in the south of the region, the air temperature will reach 20 degrees Celsius,” said Ilyas Seitkaliyev.

The Department of Emergency Situations of the Karaganda region controls 158 flood-prone settlements, where more than 21 thousand people live. Flood-prone areas are still located in the immediate vicinity of rivers and reservoirs. These are Karkaraly, Abay, Bukhar-Zhyrau and Nura districts.

“After heavy rainfall in March in the Nura River basin, an excess of the average volume of moisture reserves by 12% is observed. In the Sherubay-Nura River, moisture reserves increased by 54 million cubic meters, but this figure is 54% lower than the average long-term values, in Kengir the reserve decreased by 22 million cubic meters. According to space monitoring data, 45% of the northern territory of the region remains under snow cover. There is no snow in the southern regions of the region,” said Murat Katpanov.

Since March 11, nine blasting operations have been carried out in the region on the Nura River, in the area of ​​​​the settlements of Botakara, Petrovka, Zhastilek, May Day, Yesen, Zharly, at the Samara hydroelectric complex, and Lake Karasor, along the railway track. Explosive work is planned on sections of the rivers in the Nurinsky and Osakarov regions.

“The peak of floods is expected from 5 to 11 April. We urge residents of the region to prepare. It is necessary to minimize the consequences of floods, and for this, each resident of flood-prone settlements must put their yard areas in order, clear them of snow, drain water, and clear ditches. We are ready to help people. There is a telephone number 112 for this, residents can also contact the working numbers (8-7212) 43-36-36 and 43-37-37. We are ready for an emergency response and have the necessary highly passable equipment,” Murat Katpanov recalled.

Due to the upcoming floods, the DES of the region has been transferred to an enhanced mode of service. The regional flood control headquarters is operating, six mobile groups have been formed, which include 313 personnel, 184 pieces of equipment, including 134 motor pumps and 31 pieces of watercraft.

Mobile groups travel around flood-prone areas and carry out preventive work with people. In addition, units of seven military units of the Ministry of Emergency Situations, the National Guard and the Ministry of Defense of the Republic of Kazakhstan are in reserve.

Residents of the center of St. Petersburg complain about the installation of new road signs. “Paper”

Benmoussa: Educational support through the Urach program does not replace education within the departments

In Russia, the development of relations with the European Union was excluded Russian news EN