REVIEW: When even Karel Roden is powerless. Film Indian got zero 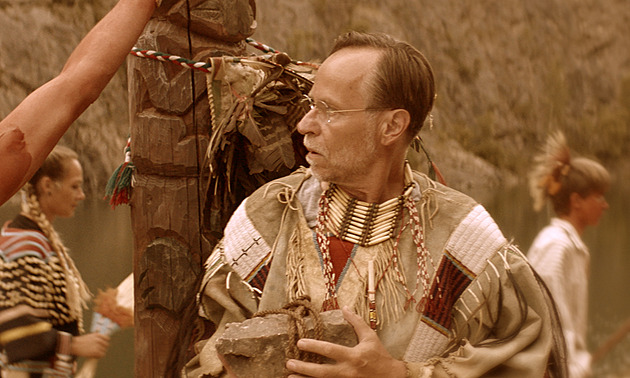 Our actors tend to be pushed painfully into the roles of saviors in any would-be comedy, not only Ondřej Vetchý in Prezidentka could tell about it. However, there is a certain limit beyond which neither a reliable name nor even holy water will help.

Karel Roden just came across her, alternately clueless and helpless in the face of the figure of a disgustingly rich developer insensitive to nature and people, who is only improved by the spirit of a buried Indian chief who enters the businessman during his flight over the reservation.

What’s worse, the spirit of the White Deer speaks encouragingly to its wearer, which for the viewer means an exhausting avalanche of phrases like from a motivational manual, and moreover repeated. On the other hand, it brings a beneficial advantage to the creators of the repete. Before Roden’s hero interprets to those around him what the chief whispers to him, the empty movie time stuffed with sponsor cars again hints at something from the outside.

Roden isn’t really to blame for the nothingness around him, and he’s not alone in hell, so he can enjoy himself mischievously as his movie wife struggles with “You’ve become an inaccessible monster” outbursts and their daughter, a punk environmental activist, saves trees. Employees neatly divided into treacherous and loyal camps then seem to crown the craziness of the plot.

But the worst is yet to come in the form of a retrospective, even parodicly veneered romance of Old Shatterhand and Nsho-chi in the opposite guard, an Indian youth and a white girl, pretending to be the American Nebraska of the 1960s.

The fact that the bony love story culminates in contemporary Slovakia with a tearful sigh of how rotten communists destroyed fateful loves already leads the viewer to suspect that he has accidentally become an involuntary, unsuspecting participant in a scientific experiment investigating how long a person will last for his investment in a ticket before it begins scream and slam the door behind him.

Actually, it would be enough to summarize that the Indian personifies a stupid, boring, schoolboy, dull-witted, and craftily flawed uselessness, on which it is a shame to waste words – and it is impossible to describe them anyway.

But behind ninety minutes of disbelief, during which the audience is taught that “everyone is fighting a good wolf with a bad one” and that “the earth is the mother of us all”, there is a great mystery, not to say a miracle.

How is it possible that someone accepted, approved, paid for such a project? How did director Tomáš Svoboda and his co-screenwriter, Bratislava-based producer Patrizio Gente, manage to make The Indian even a co-production of three countries, namely the Czech Republic, Slovakia and Poland? What kind of magic did they use to charm their partners, including Prima TV? And where did they find the courage to ask for a premier admission fee?

We use the term shamelessness for overpriced gas, petrol, food or services. It’s about time we let similar expressions into the area, where in anticipation of even more flamboyant creations, evaluations usually mercifully balance somewhere between five and ten percent. But for what?