Stand at maximum power. At the NATO Days, they practiced tanking in flight 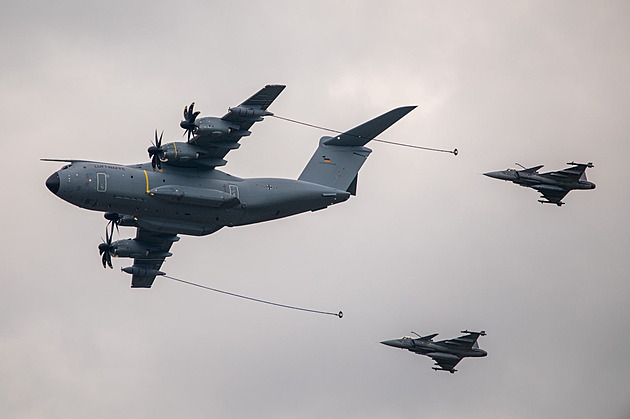 This ability is a condition for our full involvement in the allied environment. Every pilot certified for AAR (Air To Air Refueling) operations must perform a refueling from a tanker at least once every six months, so that he does not lose his original flight and does not have to go through the whole trip again, said Karel Krejik, who commanded the NATO Day organized group for the army.

et pilots with Gripen go all the way out of black air space in five countries. In addition to the Czech Republic, you are also a trio of Baltic republics – Lithuania, Latvia and Estonia, as well as Slovakia, which apparently has obsolete MiG-29 aircraft and is yet to receive the new American F-16 fighter jets.

Due to the maximum operational efficiency and due to the sweat of only thirty supersonic machines at their disposal, even the wild ones at the NATO Aviation Days in Ostrava & the Air Force Days of Armdy R could not advance as usual. the day of the words ascended, the day of the airplane on the static display.

Pesto appeared in the program on both days. They used the capability of the German general-purpose transport aircraft A400M Atlas and performed a simulation of in-flight refueling prior to the introduction of monoplane flight.

Out of sight of the spectators, they then undertook practice flights with a real tank in the air, during which a number of the pilots renewed their certification for this special skill.

It is absolutely necessary to maintain and practice this ability at the present time, and I am very glad that events like NATO Days, in addition to demonstrations for the public, contribute to strengthening the certification of our pilots and personnel. It not only completes the event itself, but uses resources effectively, efficiently and in this case also economically, since it is held on the ground of R, stated the flight editor Dn NATO and military pilot Michal Kudyn.

All four Gripen pilots are trained in the in-flight tank. Striking the skill is conditional on regular practice.

For pilots, the pit is a highly complex and difficult maneuver requiring precision, accuracy and, first, a continuous maneuver. An airplane in a tanker flight usually has a speed of 500 km/h and the edge of the tanker is only about 20 to 30 centimeters from the cabin of the tank at the moment.

et pilots still use the aircraft for in-flight tank training and its periodic practice, but for example for missions in Iceland, Italian, German, American or new German tanker services.

Soon they will be able to use the new multi-purpose fleet of new A-330 MRTT multi-purpose tankers, for its maintenance and operation, the Czech Republic is part of the NATO program according to

The use of new tankers is for the time being a conditional certification for Gripen aircraft, which should take place this year. Then the air force should get its own half of the hours for practice tanking in flight.