What the Accounts Chamber offers

The Accounts Chamber points out that in Russia, since 2016, the excise rate on the most common type of tobacco products – cigarettes and cigarettes – has grown 1.9 times. This year alone, the tobacco excise tax was raised by 20%. The growth of the tax burden of the Ministry of Finance explained the need to compensate for government spending on the fight against the pandemic in order to fulfill social obligations. 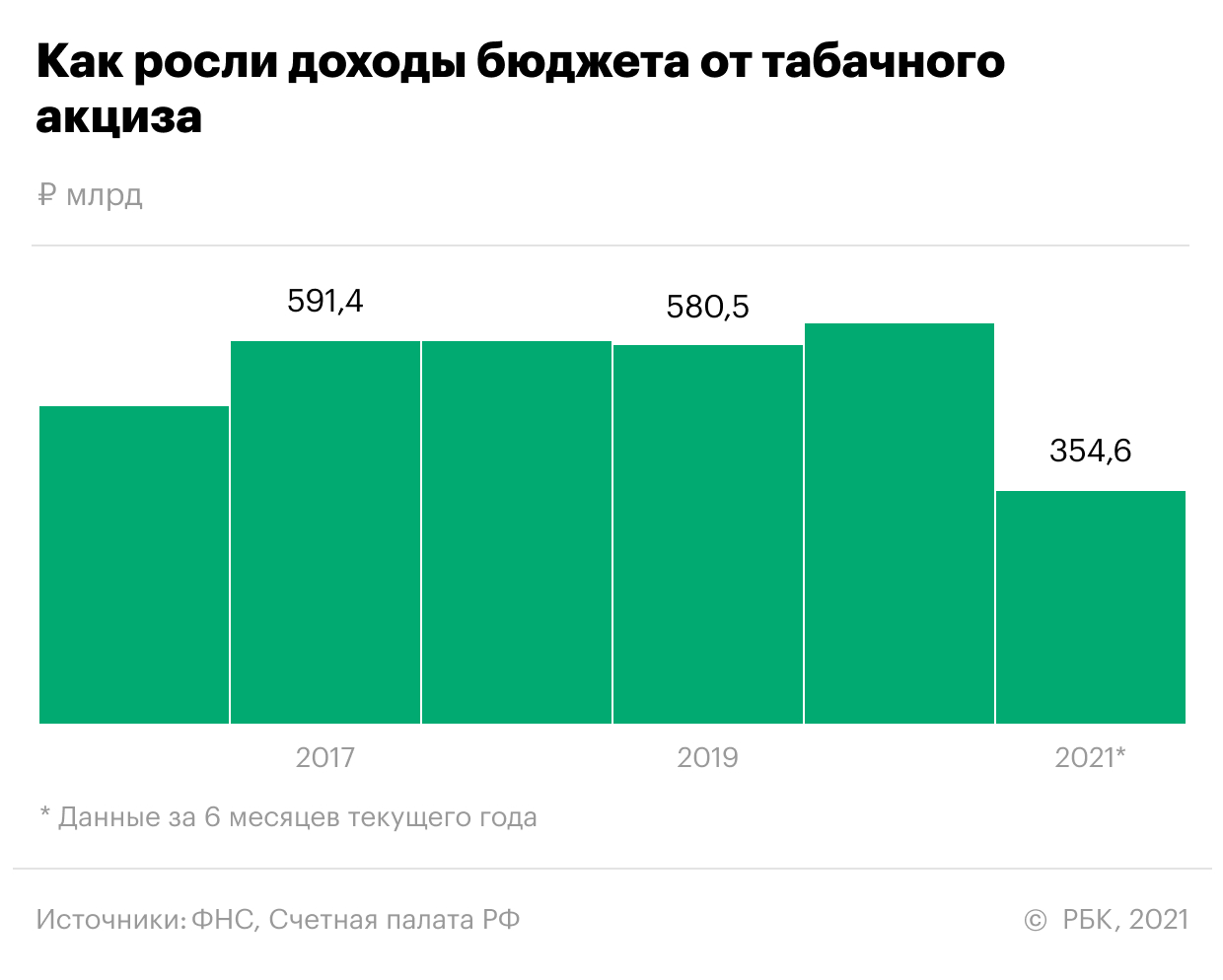 “It [повышение акцизных ставок] displeased both businesses and consumers. Against the background of an increase in excise taxes, there is an increase in the share of illegal sales of tobacco products, ”said auditor Andrei Baturkin, presenting a report at the Board of the Accounts Chamber.

The combination of two factors – an increase in the tax burden on local tobacco producers and dumping by counterfeit sellers – raises the question of revising the current excise taxation system, follows from the analytical materials of the control department. To solve the problem, in the opinion of the Accounts Chamber, the transfer of income from excise taxes on tobacco to the consolidated budgets of the regions can be possible. This will motivate local authorities to involve more tobacco market participants in the labeling system and thus “whitewash” the market. “Now they have [регионов] there is no interest in fighting for the legality of their markets where cigarettes are sold, because the entire excise tax goes to the federal budget, ”explained Baturkin.

Excise taxes on tobacco products bring about 3% of all federal budget revenues to the Russian treasury. According to the results of the current year, the amount of proceeds will be about 710 billion rubles, the auditors estimate.

The Accounting Chamber also considers the labeling system to be an effective tool in combating illegal sales and whitewashing the tobacco market. This procedure became mandatory on July 1, 2020, however, not all participants in the tobacco market have joined it. Almost half of the cigarettes currently sold in retail outlets are unlabeled.

“Last year, 11.1 billion packs of cigarettes were marked. At the same time, with the code “out of circulation”, which means sold in retail, only 5.6 billion pieces were released. In the first quarter of 2021, 61.5% of labeled packs left the retail turnover. This testifies to a significant number of turnover participants who do not submit information to the state information system for labeling goods, ”says Baturkin.

According to the Accounts Chamber, the transfer of part of the proceeds from excise taxes on tobacco to the consolidated budgets of the regions will make it possible to change the situation and involve more participants in the tobacco market in the labeling system.

What is the situation with the prices of cigarettes

In 2008, Russia, like most countries in the world, joined the World Health Organization (WHO) framework convention on tobacco control. In 2021, the Russian government approved the anti-tobacco concept, which is designed to reduce the number of smokers from the current 29 to 21% by 2035. The increase in excise as a “tax on unwanted consumption” is in line with the goals of the national plan to combat smoking. In addition, in April of this year, the government introduced the minimum retail price for a pack of cigarettes – now it is 108 rubles. Due to the increase in excise tax by 20%, on average, a pack of cigarettes had to rise in price from 120 to 140 rubles.

Since the year Russia joined the WHO convention, the specific rate of excise duty on cigarettes and cigarettes has grown faster than the consumer price index, the Accounts Chamber notes. The peak point was 2013, when the excise rate increased by 50.5% with inflation of 6.5%. From 2022, the increase in the tax rate on cigarettes should be equal to the Central Bank’s inflation target of 4%.

The tobacco excise tax in Russia is about one and a half times higher than in the EAEU countries. If Russian manufacturers pay € 35.9 per thousand pieces in 2021, Belarusian producers will pay € 18.8, and Kazakhstani ones – € 21.7, the Accounts Chamber said.

The effect of the redistribution of excise taxes

Proposals to redistribute budgetary excise tax revenues in favor of the constituent entities of the Russian Federation sound for several years, most often – from senators of the Federation Council. There are two schemes: the allocation of part of the income from tobacco excise taxes on tobacco products to the budgets of the regions and their transfer to the place of production in proportion to the size of the working-age population or according to the indicators of regional retail sales. The translation of ideas into reality is limited by the lack of a system for labeling and identifying tobacco products, says Vladimir Klimanov, director of the Institute for Public Finance Reform.

“For alcohol, there is the EGAIS system, which determines where and for how much the product was sold. The introduction of the same system is fraught with high costs. In addition, it will greatly reduce the number of points of sale, which will hit the business, ”he says. The split of excise revenues in favor of the regions may turn out to be uneven, Klimanov adds. “The excise tax is paid at the place of production. In Russia in about 20 regions there are tobacco production and only a few centers with large capacities – St. Petersburg, Leningrad, Volgograd, Rostov regions. If we distribute the tobacco excise tax in favor of the regions, then half of the subjects of the Russian Federation will not receive any budget revenues, ”the expert warns.

“The redistribution of part of the income from excise taxes on tobacco products to the regional budgets may lead to an increase in the tax potential of the most affluent regions and, as a result, an increase in the gap in the level of budgetary provision between the constituent entities of the Russian Federation,” says Elena Lebedinskaya, director of the Ministry of Finance’s revenue department (she is quoted by Accounts Chamber). About 90% of tobacco production is concentrated in the territory of only five regions, and a significant part of the working-age population – potential cigarette consumers live in high-income regions – Moscow and the region, St. Petersburg, the Ministry of Finance adds.

“Also, when deciding on the transfer of part of the income from excise taxes on tobacco products to the regional budgets, it is important to determine the sources of compensation for the shortfall in federal budget revenues,” the department warned.

When it comes to the redistribution of taxes on harmful consumption, fiscal objectives can be in conflict with moral, emphasizes Klimanov. From the point of view of increasing tax revenues, it will be beneficial for the regional authorities to promote the consumption of tobacco products, but this is at odds with the state’s anti-tobacco policy, the expert concludes.