The 12th generation Intel Alder Lake arrived just a few months ago, and now the company is launching the cheapest processors with the same architecture as the Pentium and Celeron line. One of these chips appeared in the Geekbench benchmark and it offers really cool performance.

Specs-wise, the Intel Celeron G6900 features two cores and two threads, based on the 10nm Golden Cove architecture. As you can see, it is a very basic dual-core processor with a clock speed of up to 3.4 GHz. The CPU carries 4 MB of L3 cache and 2.5 MB of L2 cache with a TDP of 46 W. The processor It is priced at $ 42, a CPU that would be ideal for eSports gaming and office workloads. 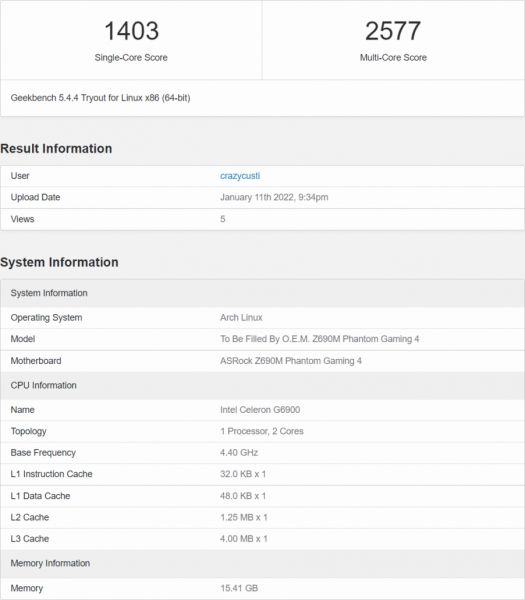 The Intel Celeron G6900 was tested on an ASRock Z690M Phantom Gaming 4 motherboard. The clock speeds were 4.40 GHz., which means the user could have enabled BFB or Base Frequency Boost technology to increase clock speeds by +1 GHz by increasing the power limit. A total of 16GB of DDR4 memory was featured on the platform as well, as this motherboard is DDR4 only.

The dual-core CPU manages to be on par with a Ryzen 3 3200G, in multi-threaded tests, remember that the Ryzen 3 3200G is a 4-core 4-thread Zen 2, so a chip with half the amount of cores / threads offers higher performance.

Volodin named the main challenges of 2022

Financier Finogenova told who has the right to early retirement