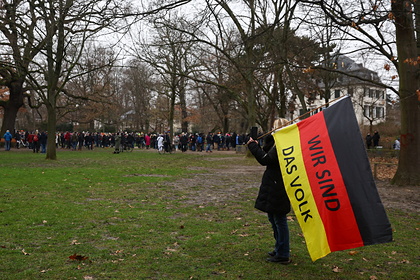 Thousands of Germans on Saturday, January 15, took part in protests against restrictions in place against the backdrop of the COVID-19 pandemic. DPA reports.

It is specified that the largest action of opponents of the anti-COVID measures took place in Freiburg, where about six thousand German citizens took to the streets of the city. In Hamburg, Germany, the action was supported by three thousand people, in Osnarbrück and Furth, about 1.5 thousand citizens expressed dissatisfaction with the policy of the authorities, while in Dusseldorf 2.5 thousand people took part in the actions. Another thousand protesters were counted in Munich.

Earlier it was reported that in France, primary school teachers announced strike to protest difficult working conditions during the COVID-19 pandemic. It was clarified that almost 75 percent of French teachers did not show up for work due to working conditions, which are further complicated by the anti-COVID measures of the government of the country. The United Trade Union of Teachers of Primary Schools and Lyceums believes that the Minister of Education, Jean-Michel Blanquer, interferes with educational institutions with his decisions.

The biathlete described her unsuccessful performance at the CM with a phrase from the film “Brother-2”: Winter sports: Sports: Lenta.ru