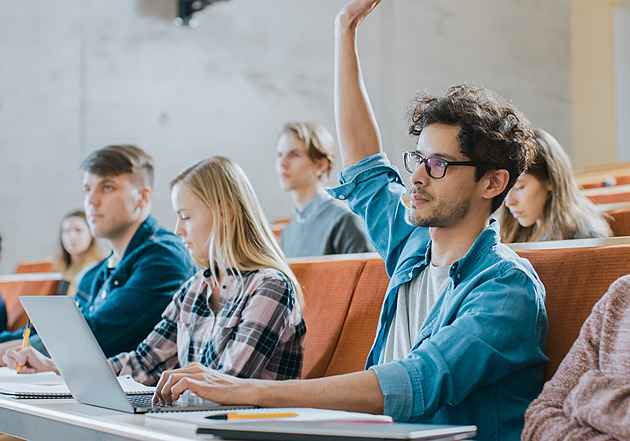 “I’m still in Ukraine, I don’t have the possibility to get to the Czech Republic. My semester already started on September 19, but I also know students who started at the beginning of the month, and they still can’t leave the country,” student Vladyslav Ihoshyn tells iDNES.cz.

At the same time, he points out that he learned about the first such cases in August, when the border guards started turning around some students and prevented them from going abroad, even though they had all the documents.

“The information on the border control website has changed several times. Initially, they allowed all students from foreign universities to cross the border. After that, only those who joined the university before the start of the war, from September 14 they banned all students from leaving,” Ihoshyn describes the situation in Ukraine.

At the same time, he supported his words with a document on which he was informed that he could not travel due to general mobilization. The announcement, available to the editors, states that martial law has been declared by order of the president.

They want to study so they can rebuild Ukraine

Nineteen-year-old Ihoshyn obtained a certificate of knowledge of the Czech language in order to study at the University of Pardubice. According to Charles University, which sponsored the exam, his language level is B1. It is this level that is needed to pass the Czech high school diploma in a foreign language.

A similar fate to the native of Ternopil, located about 131 kilometers east of Lviv, met far more people. “When I was at a crossing, I saw a boy about eighteen years old who had entered a Slovak university. He was leaving with his mother and little sister, and they had huge suitcases and backpacks. They went to the pedestrian crossing and refused to leave the boy, so they all went back again,” he says.

The number of students who did not cross the border is increasing rapidly, so they have connected on social networks. They are now adding their signatures to the letter they want to address to President Volodymyr Zelensky and members of the government. As of Tuesday evening, they had more than 1,160 signatures.

Most signatories study at Slovak, Polish and Czech universities. There are also destinations such as Canada, Turkey, Finland, Belgium and Moldova.

“Special educational programs were created for students from Ukraine, scholarships were provided, and exceptions for preferential admission were established. Our youth went to the best universities in the world to get quality higher education and later came back to reconstruct Ukraine. Taking away students’ right to study now means depriving Ukraine of its future,” they write in a joint statement.

As a Ukrainian student testified to the editors, back in May it was written on the website of the border guard that even students can leave the country if they prove that they are real students. However, this information is no longer available in the updated form of the border guard website.

At the beginning of August, the situation on the Ukrainian borders was also highlighted by Radio Free Europe (RFE). However, it is written in the text that: “In the last month alone, at checkpoints in Lviv, Volhynia, and the Zakarpattia region, about 3,500 men gave the reason for going abroad to study in a European country.” But almost half of them were sent back by the border guard, as they had no documents and confirmation that they were actually studying, another 500 or so people submitted forged documents.

In addition, the military at the border also often intercepted 54-year-old men who tried to claim that they were traveling from Ukraine to get an education.

RFE further reported that the price of forged documents ranges from $500 to $2,000.

“Yes, there really is a problem. But there is no logic in this from the border control. In the summer, when there were no classes yet, the border guards let everyone in, including the fictitious students. Now, before the start of the academic year, when the real students go to study, the government has completely banned students from going out. It seems that all the fictitious students have already left Ukraine, and the real ones are staying here,” adds Ihoshyn sadly, who remains in touch with his friends and decides what to do next.

He asked the university if it would allow him to study remotely under these circumstances, but it refused.

But the change in the rules for leaving Ukraine in a state of war may not only be due to the work of traffickers with confirmations, one of the many reasons may also be the fact that Ukraine has gone on the offensive and is trying to push Russian troops back into Russia. For that reason, he probably needs even more soldiers than in the past. In addition Russian dictator Vladimir Putin announced a partial mobilization on Wednesdayto replenish the losses of his units.

The editors of iDNES.cz contacted the Ukrainian border guard and the Ministry of Education there, but did not receive a reply.