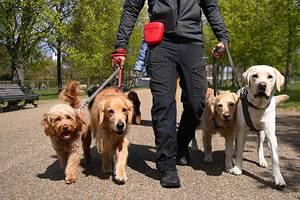 The problem of uncontrolled dog walking is acute for large Russian cities. Unfortunately, there are still very few responsible owners who clean up after their pets “traces” of walks, so most of the dog feces remain as “decorations” of lawns. And often such “mines” can be found on paths, in parks and even on playgrounds.

The issue of humane and at the same time reasonable keeping of pets in Russia is so relevant that the head of the country, Vladimir Putin, last year approved the List of instructions based on the results of checking the implementation of legislation and decisions of the President of the Russian Federation on the formation of a responsible attitude towards animals in society. As part of the execution of these instructions, the Ministry of Agriculture has prepared a bill regulating their labeling, which has already been adopted by the State Duma in the first reading. Author “20 ideas for the development of Russia» Dmitry Davydov believes that the most effective and efficient tool for this will be the introduction of a system of mandatory genetic passports (licenses) for all dogs tied to their owners in order to identify them by DNA, and therefore suggests that the ministry adopt just such an innovative method .

It would seem that modern Russian legislation provides for the obligation of the owner of the dog to clean up the products of its vital activity in a timely manner. However, in practice in our country, the norm, unfortunately, exists only on paper. The amount of fines for violations is set by the regions themselves. Sanctions even in Moscow, where, as a rule, penalties for administrative offenses are higher, reach two thousand rubles. Perhaps this measure would make many “dog lovers” think, but a well-functioning mechanism for bringing to responsibility simply does not exist. It is necessary to catch the offender “at the scene of the crime”, carefully record everything in order to prove his guilt, and then issue a fine. You can’t put a policeman on every lawn, and the institution of public inspectors in the field of animal treatment is still being formed. And it is unlikely that they will also be enough to keep track of all the owners and their pets. The prospect of law enforcement investigations of statements from citizens also looks doubtful.

Ambassador of the LPR Miroshnik reported about 8,000 Ukrainian prisoners in the Donbass. News of the day in the world and Russia today

At the Taganrog Institute named after A.P. Chekhov summed up the results of the intensive “Breakthrough-2022”