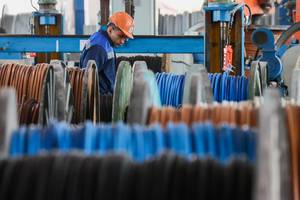 Engineers of the Moscow Research and Production Enterprise (NPP) “Spetskabel” invented an ultra-thin and ultra-light optical cable. It is planned to be used in the rocket and space industry, aircraft manufacturing and robotics, and the start of mass production is scheduled for 2023. This was announced on May 11 by Vladislav Ovchinsky, head of the department for investment and industrial policy in Moscow.

“Engineers from one of the enterprises in Moscow have created an ultra-thin and ultra-light optical microcable. The development opens up new opportunities for cosmonautics, aircraft engineering and robotics, where, along with optical characteristics, restrictions on the weight and dimensions of products are very important,” said Vladislav Ovchinsky.

According to him, now samples of the new development are being tested. In 2023, the company plans to start serial production, the production capacity will be about 100 km of cable per year.

The head of the department added that today there are 11 enterprises of the cable industry in Moscow, they are constantly modernizing their sites. In the first three months of 2022, the volume of shipment of their goods increased by 27% and amounted to 8.4 billion rubles (compared to the same period last year).

According to Andrey Gusev, head of the design and technology department of fiber-optic cables and cable assemblies at Spetskabel, the new optical cable developed by the company will be the lightest and thinnest in the world. “Of course, reducing the weight and size parameters of the microcable is not a formality, but following the needs of modern equipment. The “weightless” product can be used in the control and avionics systems of modern unmanned aerial vehicles, for intra-unit switching in densely mounted conditions, as well as in systems for monitoring and diagnosing structural elements of the fuselage and wings of aircraft,” he specified.

The engineer added that the new development can be used as a hydroacoustic cable sensor, which is used to register microseismic events in the development of underwater hydrocarbon fields. Such a system can replace tens of thousands of traditional hydrophones (a specialized microphone for receiving sound and ultrasound underwater) and accelerometers (a device that measures the projection of apparent acceleration).

OOO NPP Spetskabel was founded in 1997 and is one of the leaders in the cable industry in Russia. The company has modern production facilities, as well as scientific, technical and testing bases. According to her estimates, to date she has manufactured more than 600 thousand km of products.

In Taganrog, they are looking for an 86-year-old grandmother from Mariupol

Putin welcomed the new President of the UAE