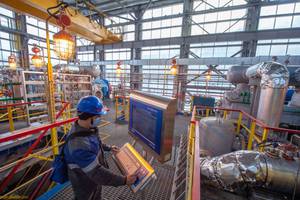 The request for pumping Russian gas through the Ukrainian gas transmission system on Sunday decreased by 3.4% compared to Saturday, to 62.7 million cubic meters. It is reported by RIA Novosti with reference to the data of the “GTS Operator of Ukraine” (OGTSU).

Since May 11, Ukraine has stopped receiving gas for transit through the Sokhranivka gas measuring station (GIS), citing the fact that it is under the control of Russian forces. As a result, only one entrance remained for gas transit to Europe – the Sudzha GIS. At the same time, Gazprom stated that the transfer of all volumes to this station is technologically impossible, but the company fulfills all obligations to European consumers, and transit services are fully paid. As a result, the application for pumping through the Sudzha GIS increased to 64.9 million cubic meters on May 14, and decreased to 62.7 million cubic meters on May 15, according to the OGTSU data. The application through the GIS “Sohranivka” remains at zero.

Formerly “Expert” wrotethat transit to Europe is reduced by 34%. And since Ukraine has left only one entrance for pumping Russian gas, this, as Gazprom warns, “significantly reduces the reliability of Europe’s gas supply.” On the European gas market, the Russian-Ukrainian gas battles have so far been reacted without much excitement. Spot prices rose by only 4% on average. True, it should be noted that the price level is already too high, steadily exceeding the corridor of $1,000-1,100 per 1,000 cubic meters this year.

In the first battle of the economic war, the battlefield remains with Russia – ExpertRU

Calendar: today is the international and favorite holiday of Azerbaijanis