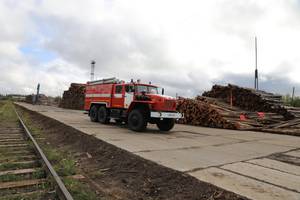 The Arkhangelsk Pulp and Paper Mill has developed proposals for improving the regulatory framework regarding the preparation for extinguishing forest fires.

The Arkhangelsk Pulp and Paper Mill proposes to adopt at the legislative level a number of changes regarding the improvement of the regulatory framework of the Russian Federation regarding the preparation for extinguishing forest fires. In particular, the plant says in a statement, it is necessary to harmonize the requirements of the order of the Ministry of Natural Resources of Russia No. 161, Appendix No. 2 of the lease agreement for a forest plot, and the point of the forest development project regarding timber harvesting. Changes need to be made regarding the calculation of standards, based on the categories of forest land.

Secondly, for large leaseholders of forest plots, whose area exceeds 500 thousand hectares, the possibility of the so-called introduction of a three-hour accessibility standard should be considered. The standard will prescribe the requirement to place fire equipment concentration points so that they cover the needs of several lease agreements and ensure the efficiency of extinguishing a forest fire.

The third proposal is the need to expand the current version of the order of the Ministry of Natural Resources of Russia No. 161 in terms of equipment that could be used in preparing for the fire season. “Reasonable sufficiency, carefully thought-out logistics for the delivery of fire-fighting equipment directly to the fires can ensure efficiency in extinguishing forest fires,” APPM said. “At the same time, this will reduce the burden on tenants of forest plots in terms of channeling funds for heavy equipment, which is now extremely expensive.”

To date, the company emphasized, all leased forest areas of Arkhangelsk Pulp and Paper Mill JSC are fully prepared for the fire season 2022. In accordance with the established requirements, the company has created points for the concentration of fire fighting equipment and the necessary emergency reserve of fuels and lubricants. In addition, on the territory of the plant in the city of Novodvinsk, Arkhangelsk region, fire departments were formed from professional firefighters who were trained under the training program for forest fire extinguishing managers.

Arkhangelsk Pulp and Paper Mill was founded in 1940, is one of the leading wood chemical enterprises in Russia and Europe, specializes in the production of cardboard and market pulp, paper and white paper products.

The head of South Ossetia, Bibilov, called joining the Russian Federation a strategic goal of the country. News of the day in the world and Russia today

Roman Pilyavsky, who died in Ukraine, was escorted to Botsmanovo on his last journey

Americans were puzzled by the forecast for the summer -ExpertRU (May 18, 2022)