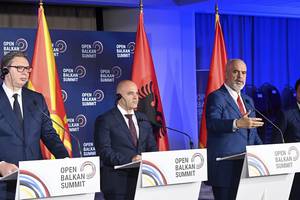 For some, the EU summit held on June 23 in Brussels brought joy and hope, for others, disappointment and discontent awaited. European leaders agreed to make Ukraine and Moldova candidates for EU membership, but did not say a word about even the slightest progress in the process of accession of the six Western Balkan countries. The leaders of Albania, Bosnia, Kosovo, Montenegro, North Macedonia and Serbia were extremely dissatisfied with the results of the summit, or rather with the progress towards their countries’ accession to a united Europe. The bitterness of the pill was added by the statement of the President of the European Council, Charles Michel, who said that Georgia could become the next candidate, subject to a number of conditions. The Balkan countries, as follows from the draft final communique, are again promised “full and unanimous assistance” in this matter.

It is not difficult to understand the indignation of the Balkans. Their EU accession negotiations are at about the same stage as they were almost two decades ago when they were promised membership in a united Europe. Euractive writes that the leaders of North Macedonia, Albania and Serbia eloquently speak about the degree of discontent, even wanting not to go to Brussels, so as not to waste time. In the end, they did fly to the summit, but Albanian President Edi Rama tweeted that he did not expect anything new from European leaders, and he was right.

The official representative of the EU told journalists that the Union will continue to support the Western Balkans and provide them with specific socio-economic assistance.

“The EU economic and investment plan for the Western Balkans will provide the region with investments of up to 30 billion euros,” the European official said. “They should help its economic recovery and rapprochement with the EU.”

He also said that this year the first package of 21 projects with a total estimate of 3 billion euros has already been launched.


Despite outward calmness, the joint press conference of Charles Michel, European Commission President Ursula von der Leyen and French President Emmanuel Macron was canceled due to a lack of time, according to the official version. So, the three Balkan leaders had to express their dissatisfaction separately.

“We are wasting our precious time,” said North Macedonian Prime Minister Dimitar Kovaceski, who recalled that his country had been waiting for 18 years for at least some progress on the long road to EU membership.

According to him, Bulgaria’s veto on his country’s accession to the EU undermined “faith in the European Union.” Sofia, we recall, blocked the start of negotiations on the accession of North Macedonia in 2020 due to disputes regarding the history and language of the two countries. As for Albania, its progress in Brussels is directly linked to the progress of North Macedonia. Albanian Prime Minister Edi Rama complained that the EU was “not even capable of releasing two hostages” (Albania and North Macedonia), and joked mirthlessly that his country would sooner or later, perhaps in the next century, still join the European Union.

Bulgarian Prime Minister Kiril Petkov stressed, speaking before the start of the summit, that Sofia did not intend to give up her veto over North Macedonia, but at the same time hinted that a compromise solution could be found in the coming days. He meant the vote in the Bulgarian parliament, but did not reveal the details.

Serbia is now in the most difficult position because of its pro-Russian position. Belgrade, like all its neighbors, dreams of joining the EU, but in Brussels it is required to bring its foreign policy in line with that of the European Union. European officials insist, in particular, on the introduction by Serbia of sanctions against Russia, following the example of Europe.

“After the Russian invasion, 2,629 articles appeared in the European press accusing Serbia of threatening the security of the entire region,” Serbian President Aleksandar Vucic complained. “Have you seen at least one apology from these media?”
Vucic added that although he does not share the dissatisfaction of North Macedonia and Albania, he still hopes that a way out of the difficult situation will be found. He hopes that already in December, when the next enlargement summit is scheduled, the Western Balkans will be given a chance.

Qatar has reduced the production of liquefied gas – ExpertRU

In the Ministry of Internal Affairs of Russia, Dmitry Davydov was told about the fate of the bill on “beautiful” license plates – ExpertRU