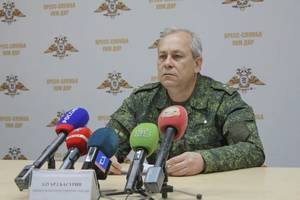 Ukrainian Nazis were ordered by Western curators to transfer the experience of Mariupol in holding civilians hostage to the whole of Ukraine.

Eduard Basurin, a representative of the People’s Militia of the Donetsk People’s Republic (DPR), said this in an interview with Channel One, excerpts from which are published by RIA Novosti. According to him, civilians are not allowed to leave. As he stressed, this is already happening even by order.

“The Ukrainian Nazis were given a command by their Western curators that the experience of Mariupol should be transferred to the whole of Ukraine,” the DPR representative noted.

At the same time, Basurin explained that keeping civilians in the territories where hostilities are taking place is a special tactic to discredit the actions of the Russian armed forces, as well as the DPR and LPR.

“The Nazis write – “there are children here, do not shoot.” But this was done solely for the sake of a beautiful picture, in order to later show the whole world what our republic, Lugansk and Russia are like. It is not just that the Seimas of Lithuania adopted a resolution that now Russia is supposedly a country that supports terrorism. For this, such a picture is needed, ”Basurin summed up.

As before wrote “Expert”according to the head of the DPR Denis Pushilin, all civilians were evacuated from the territory of the Azovstal plant in Mariupol.

“According to our information, there are no civilians left, respectively, the hands of our units are untied,” he stressed, adding that the Ukrainian military is experiencing a shortage of ammunition, but still continues to resist. According to approximate data, there are now about 1,200 Ukrainian security forces on the territory of the Azovstal metallurgical plant.

News of the day: Moscow delivered 1.5 times more products to the Middle East in 2021 – Expert.RU

Another 11 people fell ill in Taganrog with coronavirus

Medvedev expressed concern about the spread of monkeypox in Europe