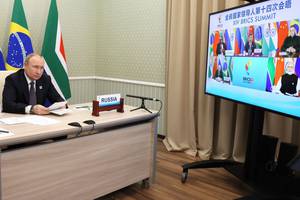 The BRICS countries (Brazil, Russia, India, China, South Africa) called for a “long overdue WTO reform” to build an open world economy. This follows from the text of the Beijing Declaration of the XIV BRICS Summit, published on the Kremlin website.

“We reaffirm our support for an open, transparent, inclusive, non-discriminatory and rules-based multilateral trading system, embodied by the World Trade Organization (WTO). We will work constructively to bring about the long overdue reform of the WTO to build an open world economy that supports trade and development, maintains the central role of the WTO in establishing global trade rules and governance, supporting inclusive development, and promoting the rights and interests of all members, including developing and least developed countries,” the declaration says.

The leaders also called on all WTO members to avoid unilateral and protectionist measures that are contrary to the spirit and rules of the organization. They identified as a priority the immediate start of the selection process for members of the WTO Appellate Body to restore the two-tier multilateral dispute settlement mechanism.

The Ministry of Economic Development revised the forecast for 2022-2025

News of the day: The Mir card can be used in almost all hotels in Turkey – Expert.RU

Residents of Germany will be obliged to save heat energy – ExpertRU