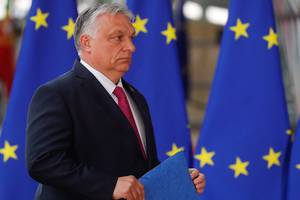 Hungary opposed the introduction of new sanctions against Russia, because anti-Russian sanctions, Budapest is sure, only deepen the crisis in Europe and at the same time do not affect the situation in Ukraine.

Prime Minister Orban, as usual, bluntly stated that he is against the introduction of the seventh package of pan-European sanctions against Russia. The Hungarian leader is confident that all kinds of restrictions against Russia are the main reason for the economic problems that the planet as a whole, and especially Europe, in particular, has faced.

“We say yes to peace and no to new sanctions,” Viktor Orban was quoted as saying by his press secretary, Zoltan Kovacs. “We need peace, not more sanctions. The only antidote to war inflation is peace.”

Supporters of increased sanctions against Russia explain their necessity by the fact that Moscow needs to cut off the cash flows that help finance the war in Ukraine. First of all, these are payments for Russian gas and oil. However, in a number of countries, of which Hungary is the most prominent representative, opposition to this point of view has formed and is becoming stronger every day.

Hungary, we recall, has long been considered something of a black sheep in the “noble” family of European nations. It once again proved its enfant terrible status when it exercised the right of veto for almost a month and prevented united Europe from accepting the embargo on Russian oil. Budapest lifted the veto only after it was guaranteed an exception from the embargo and was allowed to receive Russian oil through gas pipelines by land.


We can also recall the recent indignation of the Hungarians that Brussels included the Russian Patriarch Kirill in the sanctions list.
Europe has long ceased to be “united”, as the name of the organization suggests. This once again proved that Hungary unexpectedly found supporters in the fight against sanctions. For example, Belgium, which had never before been seen in sympathy for Russia or the USSR, called for a pause and not to rush into the seventh package of sanctions. Austria objected to the oil embargo. However, no one, except Hungary, proposed to stop imposing sanctions altogether.

At the current two-day summit in Brussels, European leaders are not discussing new sanctions against Russia, but they plan to agree to extend existing sanctions for another six months.

In Brussels, by the way, one curious event took place – Orban’s support for the inclusion of Ukraine in the list of candidates for EU membership gave reason to assume that relations between Budapest and Kyiv have improved slightly. It is known that Vladimir Zelensky, to put it mildly, does not like Orban for his support of Russia. On the other hand, it is clearly premature to talk about improving relations between Hungary and Ukraine. Especially considering Viktor Orban’s latest proposal regarding sanctions.

The right marketing approach to promotion: a checklist for creating an effective advertising campaign