On Wednesday in the social networks of the Nenets news agency there was a post about a nameless cat looking for a home. Today, the four-legged beauty was sheltered by one of the employees of the Russian Ministry of Internal Affairs for the NAO. Friday sketch about the happy fate of a fluffy ball 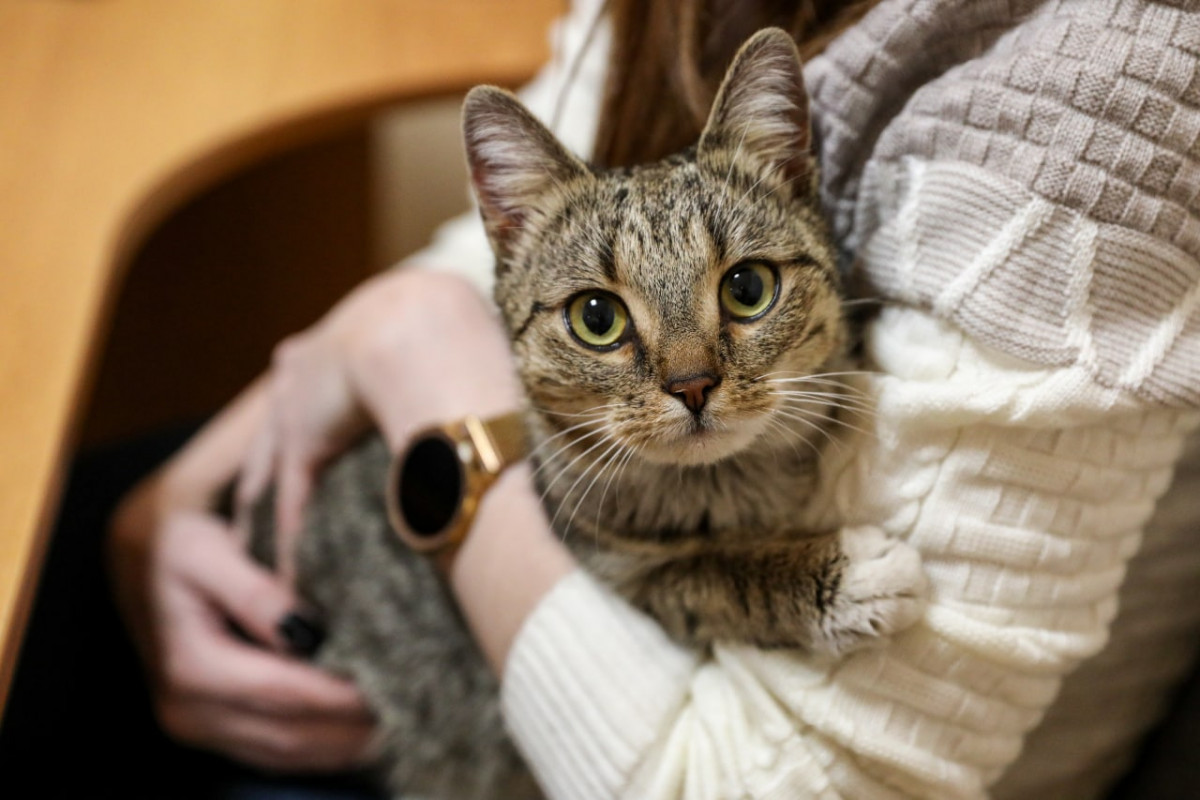 A dirty and hungry murka has been sitting at the editorial office of the district newspaper “Naryana Vander” since Wednesday morning, pressing one or the other paw, frozen to stand on an icy earthen crust. She did not go anywhere, as if she felt that luck would smile on her today.

NAO24 journalist Lena ran out of the building, late for the shoot, checking to see if she had forgotten anything on her desk. I saw a small gray lump shuddering from the sharp November wind.

“Well, how can you treat animals like that!” In such weather, alone on the street, the girl thought and hurried on business.

The nameless cat looked sadly at the correspondent and continued to wait.

Returning to the editorial office, Lena again looked at the place where the mustachioed-striped one had recently been. The little girl was sitting there, fluffed up in her last attempts to keep warm. She squealed pitifully.

So Murka was in the editorial office.

– Do you have a living corner now? – touched that day everyone who went into the second floor office, which became the temporary home of the four-legged beauty.

After dinner, food was brought to the little predator. She pounced greedily on a portion of dry food. There is no table etiquette on the street: if you find something edible, grab it quickly before it is taken away. Kittens born in the basements of houses or thrown out by unscrupulous owners understand these rules right away.

Surprised at how quickly the delicious-smelling pebbles disappeared from the bowl, but afraid to demand more, the cat curled up under a chair near the door and purred softly. She was awakened by the gentle hand of a man: a scratch was scratched behind the ear, which made her stretch sweetly.

For the rest of the day, the striped one showed her gratitude to the people who sheltered her. Emboldened, she began to jump on her knees to her savior, rub her muzzle, trample the soft white sweater with a milky step.

Lena took the poor thing home for the night. Her two domestic cats did not accept such a gift: old Sally refused to eat, Tosha, a hardened street bandit, stood on his hind legs and wrinkled his nose.

Lena took the orphan to the bathroom, carefully washed the fur from the sand, patiently listening to all the cat’s discontent. In order not to sow between the mustachioed disassembly, the adopted child was closed in a separate room, and the next morning they were returned to the editorial office of the district newspaper.

A team of journalists has already come up with a nickname for the cat – News. Good, of course. The cat was in no hurry to respond to the new name. I liked the usual ks-ks more.

For two more days, News lived in the editorial office. I quickly got used to it: I jumped onto the desktops of each employee, tried to make my own edits to the texts, imposingly walking along the keyboard.

The balalaika cat delighted everyone with its purring. It was not even necessary to stroke her, you can just let her sit on her lap.

Man, you’ve been sitting too long! It’s time to warm up, and at the same time feed me!

Lena built a small blue sunbed on an empty chair so that the new occupant of the office would have his own place.

Friday night there was a knock on the door. A tall policeman stood in the doorway. He asked where the cat was. The news immediately began to rub against the rough black boots, welcoming the guest.

– It will be ours, – the officer of the Ministry of Internal Affairs smiled, seating the baby on his shoulder.

So the news went to a new home.