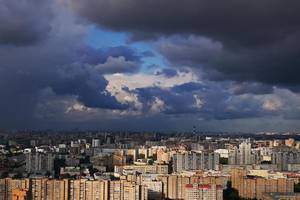 For almost the entire next week, a vast North Atlantic cyclone will be over the European part of Russia. Scattered rain clouds will walk across the sky, and fresh air of polar origin will lower the temperature by 5-6 degrees below the normal climatic norm. As Evgeny Tishkovets, a leading employee of the Phobos weather center, told RIA Novosti, the “stalled spring” is not going to please the inhabitants of Central Russia with May warmth.

“On Monday night in Moscow, the air will cool down to plus 6-8 degrees, in the daytime the air will warm up to plus 13-15, in the region 11-16 degrees of heat. On Tuesday, transient rains are promised, and the air temperature will drop another degree. On Wednesday, precipitation is unlikely, at night it will get colder to plus 1-6 degrees, in the afternoon 11-16 degrees of heat,” Tishkovets said.

On Thursday of the upcoming week, showers are predicted in the capital region, which will be accompanied by a cold north wind, the air temperature will drop to 10 degrees Celsius. Frosts and light rains are possible on Friday night, a slight warming in the afternoon. It will become warmer on Saturday and Sunday, but the temperature will still be below the climatic norm.

“The stalled spring, despite the middle of the month, is not yet going to please the inhabitants of Central Russia with real and sustainable May warmth,” the forecaster added.

Formerly “Expert” wrotethat in the 21st century the average date of the last frost in Moscow falls on April 25, and the latest frosts were observed on May 15, 2004.

Sullivan: US citizens were not injured as a result of the shelling of Erbil

May 1 in Taganrog opens “Brigantine”