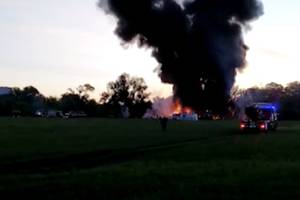 The Il-76 military transport aircraft made a hard landing in the Ryazan region due to an engine malfunction, it was performing a training flight.

“In the Ryazan region, a military transport aircraft Il-76 made a hard landing. During the training flight without cargo, due to an identified engine malfunction, the crew decided to land on the ground, ”the Ministry of Defense said in a statement.

According to TASS and Interfax, as a result of the incident, four people died, five more people were injured, they are in medical institutions in Ryazan with injuries of varying severity.

The death of four people as a result of the disaster was confirmed by the authorities of the region. “The operational group of the regional government reports that, according to preliminary information, four people died as a result of a plane crash in the area of ​​\u200b\u200bMikhailovsky Highway in the city of Ryazan. Five more with injuries of varying severity are in medical institutions in the city of Ryazan. They are being provided with the necessary medical care,” the regional government said in a statement.

A video of the crash site has surfaced online. The footage shows that the board is badly damaged. Emergency services are currently on the scene.

The Il-76 is a medium-sized turbojet transport aircraft for military and civil aviation, its operators at various times were the air forces and transport airlines of more than 40 countries, as well as the UN. Il-76 is the main aircraft of the military transport aviation of the Russian Aerospace Forces.

The number of countries that have restricted food exports has increased

Banks cut interest rates on ruble deposits by another 1%

News of the day: Shares of the day: traders are buying Sovcomflot shares ahead of the shareholders’ meeting – Expert.RU

The cause of smoke outside the city has been established