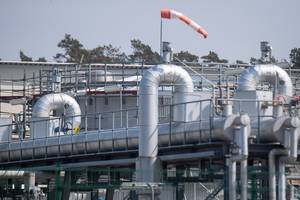 Berlin fears that Russia may take advantage of the planned preventive maintenance of the Nord Stream 1 gas pipeline in July and completely stop gas supplies. This could lead to an energy crisis in the continent’s largest economy. Russia cut gas supplies via the Nord Stream 1 gas pipeline by 60% last week. In mid-July, this gas pipeline will be closed for two weeks for maintenance. This will prevent Germany from preparing for the winter and filling up gas storage facilities, writes the Financial Times.

The supply situation is quite difficult even without the closure of SP 1. Previously, recalls Carsten Roll from the BDI association, Gazprom, during the preventive maintenance at SP 1, replaced the fallen volume of gas, increasing supplies through Ukraine or through Poland via the Yamal-Europe gas pipeline.

“There are reasons to fear,” says Rolle, “that this will not happen now. They have already reduced the gas supply through SP 1 by 60%, but they have not compensated them in any way.”

Rolle also believes that Gazprom can use the planned preventive maintenance as a pretext to, allegedly for technical reasons, stop gas supplies to Germany for a long time.

The sharply aggravated situation with gas resulted in the decision of the government, announced last Sunday by the Minister of Economy and Vice-Chancellor Robert Habek. Germany is reopening mothballed coal-fired power plants to save gas and pump it into storage for winter use.

Habek also said on June 22 that he did not rule out further cuts in supplies. Now the sharp reduction in Russian gas supplies is still hardly noticeable to consumers and the economy, because gas consumption in summer is much lower (by 75-80%) than in winter. However, it is very noticeable for power engineers, who are now filling storage facilities with gas before the start of the heating season.


As of June 22, German storage facilities were 58% full of gas. In Berlin, they want to bring the filling level to 90% by November 1st.

Due to problems with SP 1, gas importers are forced to buy the dropped gas volumes on the spot market for a lot of money. If in the summer the gas supply is stopped for a long time through all gas pipelines, then the situation may become critical.

“If we can’t fill the gas storage by autumn, we will quickly begin to feel a shortage,” says Jorg Rothermel, president of the Association of Chemical Industries. “.

The representative of the Ministry of Economy of Germany announced the government’s consultations with gas traders. According to her, Berlin also communicates with France, Italy and Austria, where Russian gas supplies have also been reduced.

Wholesale prices for buckwheat fell by 13%

News: The ruble gave everyone a big surprise – Expert

Gazprom to consider paying dividends, record-breaking in the history of the stock market of the Russian Federation – ExpertRU