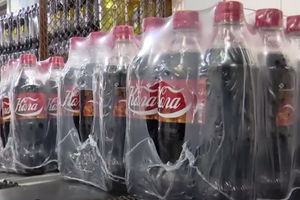 In the Republic of Komi, the Syktyvkar brewery launched the production of Komi Cola, an analogue of Coca-Cola. A flavored drink containing caffeine costs 46 rubles per 0.5 liter and is in demand, according to the Telegram channel of the government of the republic.

“The demand for local soda is growing every day. The bottled drink can be found in Komi stores, as well as in the Vologda and Arkhangelsk regions,” the report says.

The video shows the production of the drink, which is established at the Syktyvkarpivo enterprise. The chief technologist of the plant, Galina Sharikova, explained that the basis of Komi Cola is natural aromatic raw materials, it also contains caffeine. Raw materials, packaging and equipment are all Russian-made. According to sellers, the local Cola is in demand, as it is not very sweet and medium carbonated.

Formerly “Expert” wrotethat ANO “Digital Platforms” announced the opening of an alternative app store on Android NashStore. On May 9, it became available for developers to register — more than 3,000 app owners have already received an invitation. For users, the Russian analogue of Google Play will open on May 16, it can be downloaded in APK format.

News: The ruble is ready to reach 60 per dollar – Expert

Residents of Taganrog continue to provide assistance to refugees

After March 8, a woman disappeared in Taganrog