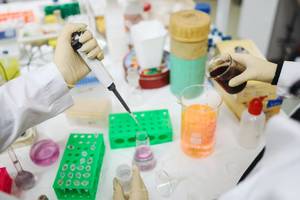 At the Center. Gamaleya, the third phase of clinical trials of a new vaccine against tuberculosis began, which, unlike the BCG vaccine existing in Russia, will protect not only from severe cases of the disease, but also from infection. This was told to TASS by the director of the Center Alexander Gintsburg.

“This is a fundamentally new vaccine with new properties. If the BCG vaccine known to us protected children from severe cases of disseminated tuberculosis, but did not protect against infection, then our vaccine should protect both children and adults from infection,” Gunzburg said.

In June 2021, the Ministry of Health of the Russian Federation issued permission to conduct a study of the tuberculous subunit recombinant vaccine GamTBvac to the National Research Center for Epidemiology and Microbiology named after Honorary Academician N.F. Gamaleya.

Formerly “Expert” wrote, that the nasal form of the Sputnik V vaccine was released into civilian circulation. In composition, it is no different from the usual form of the drug, said Alexander Gunzburg. According to him, the nasal vaccine will be available when disposable nozzles for its administration become available. Currently, work is underway on their production and supply.

what the governor visited in Taganrog

Calendar: today is the international and favorite holiday of Azerbaijanis

The ruble exchange rate will depend on gas exports – ExpertRU