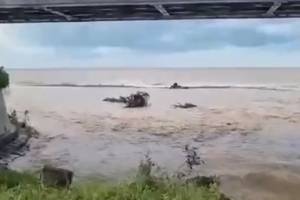 Two passenger cars were carried away by a stream of water into the Black Sea in Sochi. There were eight people in the cars.

According to the press service of the Ministry of Emergency Situations for the Krasnodar Territory, the cars ended up in the sea after the Chemitokvadzhe River burst its banks near the village of Zubova Shchel. Before that, a large amount of precipitation fell in the neighboring mountainous regions.

“According to preliminary information, eight people could be in the cars. At the moment, one person has been rescued, ”the ministry said in a statement.

Aviation of the Ministry of Emergency Situations was involved in the search for people, a rescue boat is operating in the area of ​​​​the incident.

According to Interfax with reference to the prosecutor’s office of the Krasnodar Territory, in one of the cars there was a one-year-old child, in the second car there was a family of four. It is specified that the 43-year-old man managed to be saved.

According to the Telegram channel Readovka, the Ministry of Emergency Situations managed to find the cars, there were no people in the cars. RBC, citing the press service of the prosecutor’s office of the Krasnodar Territory, writes that one person died. TASS also reports one dead.

A storm warning is in effect in Sochi from 22 to 25 June.

News: Oil: down the stairs leading up – Expert

In Estonia, called the amount of refusal of imports from Russia and Belarus