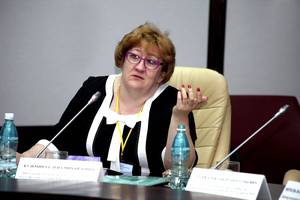 Will Kazakhstan help Russia cope with the consequences of Western sanctions, as well as the prospects for cross-border logistics projects in the Eurasian space in an interview with “Expert” said the head of the sector of the Center for Post-Soviet Studies IMEMO named after. EAT. Primakov RAS Elena Kuzmina.

– After February 24, when serious sanctions were imposed against Russia, Kazakhstan was seen as one of the platforms for economic interaction with the outside world. Do you think these hopes have been realized?

– On the one hand, the Kazakh authorities understand that they need economic cooperation with Russia. And not only from the point of view of the relocation of Russian enterprises, but for the creation of new industrial facilities. Unlike neighboring Uzbekistan, Kazakhstan is still engaged not in the modernization of current production, but in the reconstruction of industry. Because, with the exception of the oil and gas sector, everything is pretty sad for them in other industries.

Kazakhstanis within the framework of the Eurasian Union cannot equally cooperate with Russia and Belarus in the machine-building industry. Although they are very interested in it.

On the other hand, in Kazakhstani society, since Western funds work with them a lot, anti-Russian sentiments are strong. And the authorities are forced to reckon with these requests. Thus, since the beginning of the international crisis, the country has been at a crossroads.

– In addition, Europe is the main buyer of Kazakh energy resources.

– And oil is the main export commodity of Kazakhstan. Therefore, Nur-Sultan cannot quarrel with the Europeans, otherwise they risk losing most of their export earnings. Hypothetically, they could rebuild all oil and gas supplies to China, but doing this is very long and difficult. The pipelines they have to China come from other fields than those to Europe.

At the same time, they pump oil through pipelines that run through the territory of our country. It doesn’t matter who owns these pipelines, they are still on our soil, which means they also depend on Moscow. That is, Kazakhstan is now in a difficult situation: sanctions are not being imposed, but they adhere to all the rules established by the West regarding Russia.

It seems to me that the Kazakhs are used to simple solutions. It is psychologically more difficult for them to rebuild than for us. Therefore, I doubt that the Kazakhs will help us bypass the sanctions. Although they always say that they will provide their territory for the import of goods into Russia. However, for the most part, these are just words.

– Is it possible to create joint ventures?

– They already exist in Kazakhstan, for example, in agricultural engineering. Recently it was announced that some Ural plant will transfer the production of motorcycles. As I understand it, Ural motorcycles will be assembled there.

– But still it will not be a relocation.

– The issue of relocation is a very complex topic. For the production of products with high added value, specialists are needed, and as a rule, they are not enough in Kazakhstan. They will not train skilled workers according to our standards. Well, yes, there is still a Russian population there, but it is either pre-retirement or retirement age.

There is a huge outflow of Russian speakers in the country. Young people who left for Russia to study, as a rule, do not return to their homeland, and then they take their relatives to a new place of residence.

Perhaps in some sectors, for example, in the processing of agricultural products, joint ventures will succeed quite well. But from my point of view, such cooperation has limited possibilities.

It is much more profitable to transfer production to Uzbekistan, because there is a lot of cheap and relatively high-quality labor. But it also has its pitfalls. It’s one thing to move the company’s headquarters to Kazakhstan in order to pay less taxes, another thing is relocation…

Although the Kazakhs are often offended by me, I always ask them the question: who will work at the enterprises? Chinese companies, for example, bring their workers. Now, if we do like the Chinese, then perhaps something will come of it.

– And what are the prospects for transshipment of sanctioned goods?

– In trade, you can, of course, find some loopholes, transport, for example, through the Eurasian Union. But the main question is how much will the Americans and Europeans insist on secondary sanctions? If they press hard, the Kazakhs will most likely take the side of the West, because they still receive the main income from there. At the same time, most of Kazakhstan’s imports, mainly engineering products and foodstuffs, come from Russia.

Even India and China do not want to suffer on trade with Russia. Everything is still pending. Yes, Western countries punish someone for circumventing sanctions, but so far not very harshly. If such a regime lasts for a long time, and the Europeans turn a blind eye to it, then everything will work. And if they suddenly start imposing secondary sanctions, then, from my point of view, the Kazakhs will prefer not to quarrel with the West.

– Is it possible to increase logistics in the future, say, five years? Road construction is intensively developing in the region.

– Russia is now very interested in the North-South transport corridor. Firstly, because we need access to the markets of South Asia, and secondly, to reduce competition with China. Our railways run in parallel with the Chinese through Siberia to Central Asia. I mean Transsib and BAM.

Now Russia is intensively working with Iran. We signed an agreement with them on a full-fledged free trade zone within the framework of the EAEU, plus Tehran will be admitted to the SCO in September. Economic cooperation with the states of South Asia was discussed during the St. Petersburg Forum and meetings of the Eurasian Commission. Now we really need to develop the southern transport corridor, especially in the context of the restrictions imposed by the West on the movement of Russian citizens and goods.

– What will be the role of Kazakhstan here?

– In this case, of all the Central Asian states, Kazakhstan is in the most advantageous position. Because, due to their geography, logistics hubs from China to Europe or from Russia to the south will pass through this Central Asian republic.

At the same time, there are a lot of questions regarding railway tariffs. The Eurasian Union has not yet solved this problem: they want the transit tariffs for all to be internal to Russia. This project is of interest not only in Moscow and Beijing, but also in Central and South Asia. The latter also agreed to lay a gas pipeline from Russia to Pakistan.

Why is this issue still relevant for Kazakhstan? Kazakhstanis are heavily dependent on China for logistics, so they would like to diversify routes. In addition to railways, road communications will also be built.

It is important that now, within the framework of the EAEU and the SCO, we, and not the Americans, are actually opening up Iran. This is another state that will give us the opportunity to move to Asia by land.

The issues of communication with the region are handled by the Eurasian Logistics Company, in which the share of Russia is 98%, the remaining percentages are distributed between Belarus and Kazakhstan.

What is the state of the infrastructure now?

– Now cross-border highways between Russia and Kazakhstan are in a terrible state. There is no need to postpone the solution of this problem now: we must be in time in this area in order to keep up with the Chinese.

Before the pandemic, the Davos Forum compiled road quality ratings, in which Russia occupied high positions. Kazakhstan has made good progress in this direction. But logistics developed very slowly, especially in matters of monitoring the movement of goods and cargo. Although logistics centers were being built, the quality of service was improving, but according to eight parameters, only two or three worked more or less. Accordingly, it is necessary to increase the quality and quantity of centers, as well as the transparency of the movement of goods.

Sellers and consumers are interested in this. We usually build production facilities along roads, especially railways. This rule has not yet been repealed.

Nur-Sultan is a new financial center of Eurasia

– In the perimeter of the International Financial Center there are international laws, namely British law. Could this be an additional incentive for Russian companies? Let’s say in terms of dispute resolution and so on?

Let’s divide the question into two parts. There are legal issues, and there is arbitration. It is also British, and we resolve all economic disputes, or have resolved them, in British arbitration. The lion’s share of all litigation was connected with the fuel and energy complex, the rest – with the agricultural industry.

If we talk about the financial system of Kazakhstan, then many of our banks are represented there. For example, a subsidiary of Sberbank is the second largest bank in the country after Halyk Bank. Alfa-Bank is in the top four. That is, these are the largest financial institutions in the republic. But now their accounts are blocked there.

I assume that the Kazakh authorities will try to resolve these issues through the courts, since they intend to turn Nur-Sultan into the financial center of the entire region and knock this baton from Moscow. It is likely that they will be able to do this if Russia is in conflict with the West for a long time. But another option is also possible.

Bloomberg announced the readiness of the EU countries to give in to Putin’s demand to pay for Russian gas in rubles. News of the day in the world and Russia today