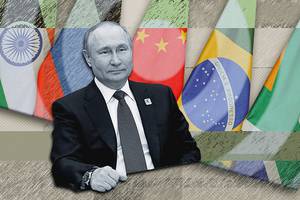 Vladimir Putin took part in the 14th BRICS Summit in Beijing under the Chinese chairmanship via videoconference. The topic of the meeting was “Strengthening the high-quality BRICS partnership as we enter a new era of global development.” The meeting was attended by Brazilian President Jair Bolsonaro, Indian Prime Minister Narendra Modi, Chinese President Xi Jinping and South African President Cyril Ramaphosa.

As Vladimir Putin noted in his speech, the countries of the association are deepening interaction on the entire spectrum of issues on the global and regional agenda, and every year the authority of BRICS and its influence on the world stage is steadily increasing. According to the head of the Russian Federation, this is an objective process, since the states of the “five” have a truly huge political, economic, scientific, technological and human potential.

At the same time, Vladimir Putin noted, the complexity and transnational nature of the challenges and threats facing the international community require the search for collective responses with the active participation of the association. “And of course, only on the basis of honest and mutually beneficial cooperation can we look for ways out of the crisis situation that has developed in the world economy due to the ill-conceived, selfish actions of individual states, which, using financial mechanisms, in fact, spread their own mistakes to the whole world. in macroeconomic policy,” he said.

Today, the Russian President stressed, the leadership of the BRICS countries in developing a unifying, positive course towards the formation of a truly multipolar system of interstate relations based on universally recognized norms of international law and the key principles of the UN Charter is needed more than ever. At the same time, one can count on the support of many Asian, African, and Latin American states striving to pursue an independent policy.

Towards the new G8 and quality for all

In a world where the idea of ​​the right and wrong side of history is being promoted, the next BRICS summit focused on cooperation and reforms is an example of the evolutionary development of the modern political and economic system of the world, points out Andrey Kochetkov, Leading Analyst of the Global Research Department at Otkritie Investments.


He draws attention to some of the issues discussed by the leaders in Shanghai.

The first is clearly overdue reforms of the UN Security Council and the WTO. Brazil and India have long been claiming to upgrade their status in the UN Security Council, as they are the main forces in large geographic regions and are responsible for their sustainable development. And the mechanisms of the WTO have almost ceased to work, since for some states their own rules of the game have become the main ones, and not the norms of economic interaction agreed upon jointly.

Universal access to cheap, reliable, sustainable and modern energy sources – this issue is also becoming more and more relevant, especially if you pay attention to the number of countries on the verge of an energy crisis, Andrey Kochetkov notes. These are the BRICS members India, China and South Africa, and other countries – in particular, Australia, and the EU states. The persistent implementation of the green agenda has led to the fact that now the countries of the “green” bloc themselves are forced to compensate for the energy deficit at the expense of “dirty” coal. Meanwhile, in the BRICS countries, they approach the issue of “green” energy in a more balanced way, offering a phased replacement of “dirty” technologies without compromising economic development.

Strengthening the arms control system and maintaining its integrity in the interests of global stability is another important issue, the expert believes. In fact, the current global geopolitical instability began with the fact that the United States unilaterally began to withdraw from various treaties, including missile defense, INF, etc., which led to a new arms race and increased distrust. Clear agreements in the military sphere and their observance will make it possible to release the necessary resources for economic development and improving the living standards of people.

However, Kochetkov says, all this is important, but one more, extremely fundamental issue has not yet been included in the summit declaration. Vladimir Putin announced the development of an international reserve currency based on the BRICS currencies. The issue of creating alternatives to SWIFT is also being addressed, which will free the banking system from US control. Chinese CIPS and Russian SPFS act as solutions.

India does not yet have its own sovereign internal financial messaging system, but a local solution can be built on the Russian platform. The creation of a universal currency of the “five” and a banking messaging system will lead to the fact that countries will be able to mutually reserve international reserves and completely get rid of the monetary and political control of the United States and Europe, which involves choosing the “correct” (and therefore pro-Western) side of history.

Now the idea of ​​creating a new G8 is being widely discussed – an economic and political union of developing countries that the old G7 does not want to include in its orbit. In terms of purchasing power parity, the countries of the new G8 are superior to the old G7 and may well become an alternative to the “old” world. A unipolar order is always a loss in terms of competition. Accordingly, Andrei Kochetkov concludes, the emergence of new economic and political associations leads to improved competition, and therefore improves the quality of the final result for everyone, and not for the elite.

In fact, the current meeting repeats the tasks of the previous year; only external circumstances have changed, Pavel Gavrilov, an expert on the stock market at BCS Mir Investments, in turn, points out. The BRICS countries strive to create conditions for fair competition in international trade and economic cooperation, expand and create a multipolar world. Now such trends are called the “new reality”, to which all countries are trying to adapt.

It is noteworthy that Brazil, India and South Africa are trying to cooperate with Russia and China, while remaining partners with the West. The Chinese side notes that it would welcome the entry into the BRICS and other countries.

As for Russia, our country is now under total sanctions, and BRICS is a confrontation with the West, within which it is possible to obtain markets for various products while importing from participating countries, Gavrilov draws attention. In addition, if confidence in the dollar declines and the number of BRICS allies grows, this will affect the entire global financial system. To summarize, now the “five” is undergoing a test of strength, which will show whether BRICS can exist without dependence on the West.

It is difficult to say exactly how this will be achieved, given the fact that each country has not only common, but also its own interests, Pavel Gavrilov notes. But if we talk about joint efforts, then BRICS is aimed at achieving the security of states, jointly solving the problems that have arisen, as well as a coordinated way out of the current crisis situation.

Economists from TsMASF and the Russian Academy of Sciences have proposed creating a new payment unit for settlements in Russia. News of the day in the world and Russia today

News: Who lives in the little house: the new law on personal data will complicate real estate transactions – Expert

Turkey cooled the ardor of Finns and Swedes – ExpertRU

News of the day: more than 2.5 thousand people visited factories and factories in Moscow – Expert.RU