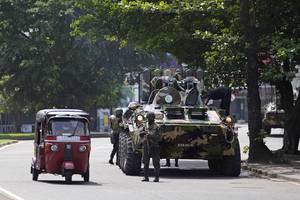 The Republic of Sri Lanka is in its worst economic crisis since independence. For almost a decade, power here has been in the hands of the Rajapaksa family. Mahindra Rajapaksa was the prime minister and his brother Gotabai Rajapaksa was the president. Both were heroes of the civil war (at least for the Sinhalese population, that is, 70% of the inhabitants of the island), but they turned out to be useless managers. For example, after coming to power in 2019, President Gotabai Rajapaksa drastically reduced taxes, resulting in a 30% decrease in the budget filling under this item. The people liked it, but the country lost its financial income.

Another populist move is subsidies for food and fuel that have proved unsustainable for the budget. Inflation has risen sharply. The ban, for the sake of preserving foreign exchange reserves, of the import of chemical fertilizers, which received the name of “100% organic policy” in its justification, led to a sharp and very untimely reduction in agricultural production.

Perhaps the authorities hoped that tourism revenues would help cope with the situation – but due to the pandemic, there were no tourists. In addition, another source of foreign exchange in the country has disappeared – transfers from Sri Lankans working outside the country have decreased. And now the situation has been finished off by a sharp rise in food prices, as well as fuel (the cost of gasoline has increased by almost 75% since January).

As a result, by April, the country simply ran out of money for imports. This year, the Sri Lankan country has to pay off debts of 7 billion US dollars (and the total debt was more than 50 billion), but as of March, the country’s gold and foreign exchange reserves stood at 1.6 billion. The import of goods – even essentials – has declined sharply and this has caused a surge of discontent among the population.

In the middle of last month, the authorities defaulted and stopped paying debts, but the protests continued. Dissatisfied citizens smashed everything, catching on the street the rich and supporters of the current government. Rumors began to circulate actively that Indian peacekeeping troops would be introduced to the island (as they were introduced, for example, in the late 80s, during the civil war). However, the Sri Lankan military said that this was not necessary.

“Our armed forces have enough experience and we are able to ensure our own security and the defense of the country, so we do not want any foreign forces to come here to restore law and order,” General Chavendra Silva, commander of the country’s ground forces, said. The authorities even gave the military the authority to shoot to kill the rioters. At the same time, the generals seek to calm the situation and verbally. “We call for maximum support for the heroism of our military personnel in their efforts to normalize the situation and establish peace in the country,” Shavendra Silva said, urging everyone to stay at home “and not, under any pretext, go out on the roads in groups.”


By the second decade of May, it seemed that the situation began to improve. On May 9, one of Rajapaksa’s brothers, Mahinda Rajapaksa, the prime minister, resigned. The leader of the United National Party of Sri Lanka, Ranil Wickramasinghe, became the new head of government. Now he will most likely try to create some kind of “government of national unity” – that is, to unite all the significant forces of the country in power, thereby making them interested in ending the riots.

Probably, in this case, he will be able to reduce the intensity of the protests for some time. The head of the IMF mission, Masahiro Nozaki, has already stated that “the Fund is ready to start full-scale political negotiations after the formation of the government.” However, it is clear that these negotiations could take months. Meanwhile, the global economic situation is deteriorating (some experts believe that the crisis will peak in autumn).

Local politicians understand the alignment, which means – and this is the second thing – not all of them will want to take responsibility for future problems. From a purely political point of view, it is now more profitable to remain in opposition and gain populist points by criticizing the authorities. In fact, representatives of the main opposition party have already stated that they will not become part of the government as long as members of the Rajapaksa clan (that is, the current president) remain in power.


Of course, there is hope that regional leaders India and China will help Sri Lanka. New Delhi has already donated $1 billion to help the island, and the Chinese have also helped with new loans and the restructuring of old ones. Help, of course, is important and necessary, at least for import. According to some reports, by the beginning of May, the reserves were reduced to $50 million. However, these two countries are by no means the main creditors of the island: China accounts for 10% of the debt, India – 2%. If we take the rest of the creditors, then 9% from the World Bank, 10% from Japan, 13% from the Asian Development Bank, and almost half of the debt is held by private investors. They are unlikely to restructure.

The UN Secretary General and the DPR authorities reported that about 500 people were evacuated from Mariupol in a day. News of the day in the world and Russia today

Exactly one week later, residents of Taganrog will take part in the procession of the “Immortal Regiment”

The Baikonur Cosmodrome will be upgraded – Expert.ru