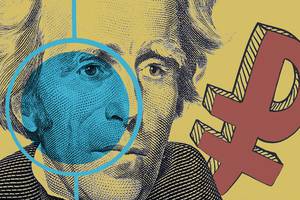 Today trading on the foreign exchange market was calm. The dollar-ruble pair was trading in the range of 53-54 for most of the day. At the same time, attempts were repeatedly made to go under the lower boundary of the emerging outset, but all of them, like yesterday, ended in failure.

Speculators, meanwhile, stopped supporting the “Russian”. Today, once again, the ruble was worth a couple of tens of kopecks cheaper on the forex sites than on the Moscow Exchange.

But while the upward trend in the ruble remains in force. The main volume of foreign exchange earnings, which must be sold to fulfill obligations to the budget, may enter the market tomorrow and on Monday.

It is also worth noting that the turnover of euro trading today was minimal since the beginning of the month, and this is evidence that “unfriendly countries” have not yet begun to transfer funds to Gazprombank in payment for gas.

So the probability of the growth of the Russian currency in the coming days up to the level of 50 rubles. per dollar is high.

The Russians have identified professions preferred for marriage

News: Where the horizon is visible. Where do residents of cities move to? – Expert

“Elizaveta Bam and not only” – meeting with Anya Gerasimova – ExpertRU