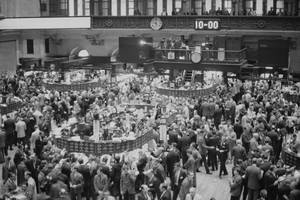 Such a rise in American stocks, as on Friday, at other times could be considered the brightest event of the year. But for a “bear market rally” that came after a grueling sell-off, these epithets are not very suitable. Although the numbers are impressive.

This allowed the S&P 500 index to rebound from the “bear market” territory (minus 20% from the historical maximum), to which, during Thursday’s trading, at some point it did not have enough fractions of a percent. And Nasdaq is now losing not 31% from the November peak, but 27%. However, this did not prevent the indices from closing another week in the red. And this series of falls can already be considered outstanding, although historical records have not yet been rewritten by it.

For the S&P 500 and Nasdaq, this is the sixth such case in a row: the longest “black bar” since 2012 for the first and since 2011 for the second. And the seven falls at the end of the week, shown by the Dow, were not even observed in every crisis – the last time was in 1980, that is, more than 40 years ago. What is called, “the old-timers will not remember.” Although, for example, during the years of the “dot-com bubble” deflating, slightly shorter series (4-6 weeks of Dow falls) happened more than once.

In any case, US stocks fell for a very long time. And although there were enough fundamental reasons for the decline, a lot of technical, psychological and other factors have accumulated that voted for a respite.

Sentiment has become very bearish, which usually requires detente. Some analysts (for example, in BofA) even saw in the last week’s situation some signs of “capitulation of investors”, starting a hasty evacuation of money from the market.


Equity fund outflows are in their fifth week in a row, but they did accelerate last week, according to Refinitiv Lipper data. The S&P 500 fell to 3858.87 on Thursday, about 10% below the average public entry point in 2021. So investors had reason to twitch.

But a series of seven weeks of falls in a row is not by chance so rare. Everything that contributes to them simultaneously leads to the accumulation of “short positions” and other fuel for “bear rallies”. And there always suddenly happens a week or two, or even a month of growth, interrupting a series of falls.

“Just as trees don’t grow to the sky, prices don’t drop forever,” CFRA chief investment strategist Sam Stovall told CNBC Friday. “Even with corrections and bear markets approaching, there is usually a ‘relief rally’ that seems to have started in the markets today.”


In order to move the process of profit-taking “bears”, it turned out to be enough remarks on Thursday by the President of the Federal Reserve Bank of San Francisco, Mary Daly, and then by the Chairman of the Fed, Jerome Powell. They boiled down to the fact that the regulator does not consider a more serious step of raising the rate than 50 basis points at the meeting. On Friday, the planned closing of positions before the weekend was added to this.

This says a lot about the quality of the growth of the entire market, although the movements in the Dow were not so rapid. Among the blue chips, Nike led the way, up nearly 4.8%, now losing just 37% from its 52-week high. Second with 4% growth were shares of Salesforce (minus 46%). Against this backdrop, Apple paper, which rose 3.2% in a day and managed to look out of the “bear market” (minus 19.6%), looked like a model of stability. All this does not yet look like a long-term, and not a local “bottom”.

“Too many people are trying to ‘bottom down’ right now – it’s proving to be a futile and costly endeavor,” All Star Charts investment strategist Willie Delwich told Reuters. “This is a risky environment. Stepping aside and letting volatility run its course would make a lot more sense for investors.”


Scientists have recorded that the phrase financial globalization, which was later reduced to just “globalization”, first appeared in 1984 in the Wall Street Journal. So with its long decline, Dow Jones looked into the economic past of mankind. Or maybe this is the future? Although, perhaps, such far-reaching conclusions should not be drawn.

About 300 fighters of the Armed Forces of Ukraine left Azovstal in Mariupol. News of the day in the world and Russia today

The 2022 Oscars went to CODA: Child of Deaf Parents, with Will Smith’s stunt hitting host Chris Rock on stage. News of the day in the world and Russia today

GREENWICH PARK* – relax at half the price!