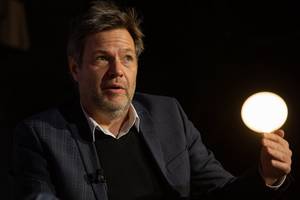 Vice-Chancellor and Minister of Economics and Climate Protection of Germany Robert Habeck warned on June 23 that the so-called second level of alert for the gas emergency regime (ES) will be introduced from that day. The first was announced in March of this year. According to the document, the country has begun large-scale energy saving and gas injection into underground storage facilities.

Khabek claims that the consumption of Russian gas has allegedly been reduced from last year’s 40% of total needs to 26%. And by June 23, the UGS facilities will be filled either by 58%, or even by 60% (the testimony of the Vice-Chancellor changes as he speaks to different audiences).

According to him, the reason for such a radical decline in consumption was the reduction in gas supplies from Russia and high prices on the gas market. “The situation is tense, but so far the security of supplies is guaranteed,” the vice-chancellor is certain for some reason.

However, he finally publicly acknowledged that his country “is in a gas crisis.” Because “gas is a scarce commodity, prices are already high, and we must be prepared for further increases.”

The second level of the gas emergency in Germany means that the final energy suppliers receive not just the right, but the obligation of the state to sell gas to businesses and households at the highest possible prices in order to reduce demand. In this case, the actual cost will be set by the German Federal Network Agency.


At the third “emergency” level, which, apparently, is not far away, the gas market will be manually regulated by the authorities. First of all, they must provide energy to households and social institutions. The industry will be supplied (if at all) in the second or even third turn.

How the specific mechanism of the energy dictatorship will look like in German, Habek explained on June 21, speaking at the annual congress of the association of German industry (BDI).

He explained that if “we come to winter with gas storages half full”, and at the same time “the gas valve is closed”, then Germany will be affected by a “severe economic crisis”. Therefore, it is necessary not to use gas at all in the summer, but only to pump it into underground storage facilities, and generate electricity at coal-fired stations.

And this, according to him, is the real “ambitious plan.” And if it takes place, the UGS facilities will be full. Then this will give the vice-chancellor hope to do without Russian supplies altogether. But for now, we are talking about “the economic and political situation is worse than in the COVID pandemic.”

And if this situation persists until winter, then certain “gas-intensive industries will be disconnected from supplies not for a week”, but for “months”. And then, Habek warned the industrialists, “enterprises will simply disappear.”

But the German government is working according to plan. And this gives hope in the fight against Russian gas. At the same time, it was promised to overcome inflation, which is based on too high gas prices. On June 23, they simultaneously exceeded $1,500 per 1,000 cubic meters on European stock exchanges.

Vice-Chancellor Robert Habek, a representative of the Green Party, which actually achieved the complete closure of nuclear power plants and the mass conservation of coal-fired thermal power plants, prefers to keep quiet about the horrific harm to the environment of coal fuel. Moreover, the German government generally claims that a large-scale transition from gas to coal in the energy sector will not bring any harm to the green agenda, since this process will be closed by the end of 2024. The same is true in the Netherlands and Poland. These countries also intend to reactivate coal-fired thermal power plants, which by 2024 should generate up to 35% of the electricity consumed.

Interest Ask. Where will they get coal? From August 10, an embargo on the supply of Russian coal is introduced (part of the fifth April EU sanctions package). And in 2021 they provided a third of consumption in the EU. There is an answer. German energy companies are hoping to get permission to develop particularly “dirty” lignite, for example, in the Rhine River region. Moreover, in a quarry, as a rule, in a way that is distinguished by particularly high air pollution.

The accelerated introduction of renewable energy, for which the European Commission on May 18 promised to allocate 300 billion euros by 2030, is being postponed to a later date.

In the global expert community, it is now often customary to discuss who actually announced sanctions and against whom. Sometimes one gets the feeling that the Atlantic allies are dealing with themselves, and not with Russia.

So on June 23, many Western media came out with headlines like “Canada hit Germany hard.”

The fact is that on June 14, Gazprom reduced the flow through Nord Stream 1 from 167 million cubic meters to 100 million cubic meters. m per day, June 16 – up to 67 million. That is, by 60% in general. The Russian company explained this by problems with the repair of turbines, for which (under the agreement on the construction of the pipeline from 2009) the German corporation Siemens is responsible. In turn, she explained the delay in the return of units from repair by additional sanctions introduced by Canada in early June: turbines are being repaired at the Siemens plant in Montreal.

Of course, Habek and Chancellor Olaf Scholz were quick to blame Russia for everything. According to Berlin, the decision to cut supplies is political. In other words, in Moscow, they say, they are training on the introduction of a complete gas embargo in order to push the EU into recession, or even launch Nord Stream 2 into action. In Berlin, they even hinted that this was not a scheduled repair, but a planned accident.

Meanwhile, on July 11, Nord Stream 1 really gets scheduled preventive maintenance for two weeks. So there will be practically no gas for Europe. There remains only one transit route through Ukraine, with a technical volume of no more than 77 million cubic meters per day.

By the way, Canada partially admits its guilt. Natural Resources Minister Jonathan Wilkinson said Ottawa is exploring ways to secure gas supplies via Nord Stream 1. He stressed that the purpose of the restrictions is not to cause problems for Germany, which “is one of the closest friends and allies” of Canada. But Canadian sanctions will also have to be respected.

This means that the head of Gazprom, Alexei Miller, is right. There is no way out of the situation with German turbines. Germany, apparently, this winter will still have to introduce the third level of gas emergency warning.

More than a thousand citizens voted to reconstruct the Gradonachalnichesky Spusk

Forecasters told when the heat will come to Moscow – ExpertRU