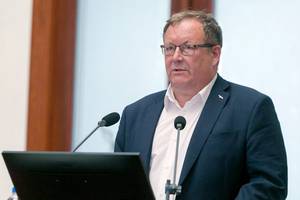 In the current situation in the Russian economy, the Arkhangelsk Pulp and Paper Mill proposes to adopt a package of non-standard decisions on priority issues for the country’s pulp and paper complex. Nikolai Krotov, Director for Relations with State Authorities of Arkhangelsk Pulp and Paper Mill, made such a statement at a meeting of the Board of the Chamber of Commerce and Industry of the Russian Federation.

In his speech, Nikolai Krotov noted that the total physical volumes of production of pulp and paper products during the first four months of 2022 do not show indicators of a critical decline, and in certain areas continue to show growth, confirming the trends in the market of recent years. At the same time, these indicators cannot be the basis for building trends for the long term, February, March and April are too inconsistent in statistics – each separately.

“The rapidly changing situation, anxious expectations, gloomy forecasts, the reaction of the authorities to new challenges, so far only allow us to assume what will happen next, and not build any trends based not on statistical calculations, but on general anxious expectations,” Nikolay said. Krotov.

According to him, for almost all types of products, with the exception of bleached sulfate pulp and testliner, export volumes decreased in the first four months of the year compared to the same period in 2021. With a significant drop in demand in the domestic market, primarily for corrugated packaging, the duration of the period of stable production volume is limited only by the capacity of warehouses at enterprises. Unfortunately, it is rather difficult to expect positive changes in the corrugated packaging market now.

Changing the geography of product deliveries, replacing European markets with Asian, Middle Eastern and Latin American ones is not an absolute problem in itself, APPM is sure. According to the plant, the demand in the world for the products of the Russian pulp and paper industry is stable, the quality of products and the integrity of manufacturers are known to everyone. But the accentuated shift of the main supply vector to the east provoked a logistical collapse in the movement of goods to China.

According to Nikolai Krotov, in this difficult situation, the problem of logistics is a key one for the pulp and paper industry. For plants, primarily from the European part of the country, the change in logistics supply chains has led to a significant increase in the time, distance and cost of transporting products from the plant to the end customer.

Since the beginning of March 2022, these factors have caused an avalanche-like increase in sea freight rates and rates for multimodal container transportation, as well as a sharp decrease in the number of available fleet due to sanctions against Russian shipowners and the refusal of European container carrier companies to work with cargo from Russia. Compared to the fourth quarter of 2021, the delivery of cargo in containers from Arkhangelsk to China has more than doubled, the cost of transportation to North African countries has increased by more than 1.5 times.

The second most important problem is the provision of pulp production with consumables, primarily chemicals. This issue became the most acute for enterprises in March due to the refusal of European suppliers to fulfill contracts for the supply of large-tonnage (bulk) chemicals: sodium chlorate, sulfurous anhydrite, hydrogen peroxide.

Nikolai Krotov emphasized that the key actions for the sector were the actions of the management of the largest Russian plants, which in the shortest possible time searched for acceptable solutions to eliminate the problem. All, without exception, decided on alternative suppliers of chemicals. However, due to logistics, the guaranteed supply of production with “chemistry” is visible for 2-3 months in advance.

A similar situation is now observed with other consumables and components. The replacement of European clothes, cars, cloth and other components with Asian counterparts, which will take place at most enterprises this autumn, will again require super efforts from technologists of Russian enterprises. At the same time, according to Mr. Krotov, there are risks of either reducing the quality of products, or technological losses.

In this regard, APPM puts forward a number of proposals that should help the industry in the long term. Among the proposals are stimulating and providing comfortable conditions for foreign companies from friendly countries to create representative offices in Russia. These representative offices, Nikolai Krotov believes, should provide service support for imported spare parts, consumables, chemicals, equipment, etc.

At the same time, APPM considers it necessary to organize the employment of Russian highly qualified employees of service companies from unfriendly states that are curtailing their activities in Russia in order to provide services within their competence.

Among the important measures, the plant sees the reformatting of tools to support import substitution projects, including when they are implemented by participants in industrial clusters, the development of a state (national) forest certification system, mechanisms for its promotion in the markets of friendly countries, and, subsequently, in other markets.

Among the proposals are the expansion of state support mechanisms for the backbone organizations of the timber industry complex of Russia beyond those currently operating in accordance with the rules for granting subsidies from the federal budget to Russian civil industry organizations in order to reduce the cost of transporting products, approved by Decree of the Government of the Russian Federation No. 496 in 2017 .

The Arkhangelsk Pulp and Paper Mill also proposes to increase the guaranteed dimensions of the passage on federal inland waterways traditionally used for the transport of timber by water (the rivers Severnaya Dvina, Pechora, Angara, Lena, etc.).

Arkhangelsk Pulp and Paper Mill was founded in 1940. It is one of the leading Russian wood chemical enterprises. It specializes in the production of cardboard and market pulp.

In the Kherson region, they talked about plans to hold a referendum on joining the Russian Federation – ExpertRU

News of the day: The oil market sank after the decision of the Fed – Expert.ru