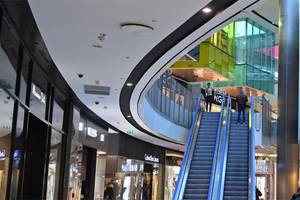 Almost 700 jobs will appear in Moscow after the construction of two shopping centers in the west and south of the capital under the program to stimulate the creation of work places. This was announced by the Vice-Mayor of Moscow for Economic Policy and Property and Land Relations Vladimir Efimov.

“Recently, Sergei Sobyanin approved four projects to create jobs in the city. According to one of them, the investor will build a shopping center with an area of ​​eight thousand square meters on Elevatornaya Street in the Southern Administrative District. The company will invest more than 774 million rubles in the implementation of the project. The developer plans to put the facility into operation in March 2025, after which 430 people will be able to work in the new shopping center,” the Vice Mayor said.

The developer will be provided with lease incentives for changing the type of permitted use of the land plot in order to build an apartment building in a residential complex on Andropov Avenue. According to another project, the investor will build a shopping center on the Ochakovskoye Highway in the Western Administrative District of Moscow. Its area will be 7 thousand square meters. 250 jobs will be created there.

“A number of anti-crisis support measures have been adopted in the capital for developers participating in the program for creating work places. Thus, the bank guarantee rate, which developers receive for the implementation of the project, now does not depend on the key one and is fixed at 9.5% per annum. In addition, the period for issuing bank guarantees has been extended. Companies will have to provide it under new conditions – not three months, but six months after the signing of the agreement, ”said the head of the Moscow Investment and Industrial Policy Department. Vladislav Ovchinsky.

The program to stimulate the creation of work places was launched in Moscow in 2020. It is designed to create jobs in residential areas in order to reduce migration to the center of the capital and reduce the burden on transport and roads. Under its terms, developers receive benefits when re-registering land plots for housing construction, if they simultaneously build commercial, industrial and social facilities.

News: Euro will be equated to dollar – Expert

Today in Taganrog on the central streets traffic is limited