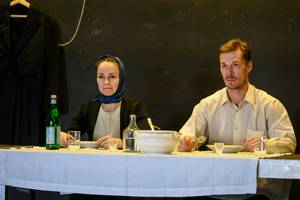 The performance “The Womb” came out of the director’s laboratory “After the Revolution (Dramaturgy and Prose of the 1920s-1930s)”, held at the Moscow Art Theater. A.P. Chekhov in 2018. This is the early prose of Yevgeny Zamyatin, an amazing stylist and prose writer. He grew up in the Silver Age, and wrote mainly in the era of the formation of the Bolshevik state. The story of 1915 is the first attempt to get close to the big story “The Flood”, which has been actively staged in the Russian theater in recent years.

Passion, love, lust, fear of death, the land giving birth, the fruitful and the land in which they die, crime and punishment, woman and man, soul and body – these are the topics of interest to Zamyatin, who writes in a crisis era that crushes the foundations. The events of the story “The Womb” take place in a remote provincial corner of Russia. Zamyatin portrayed “a typical family of the people.” The heroine of the story is a peasant woman, Afimya, married to an unloved man, Pyotra, who is much older than her.

A typical Zamyatin tale turns into a metaphorical action and almost an opera. The words are sung, creating beautiful forms that describe the not always pretty, not always beautiful peasant life.

Andrey Goncharov graduated from RGISI (workshop of Veniamin Filshtinsky) in 2016. As a director and actor, he worked at the Etude Theatre, participated in several director’s laboratories at the Bolshoy Theater. G.A. Tovstonogov. Goncharov’s performances are at the Moscow Youth Theater, the Taganka Theater, the Saratov Youth Theater. Yu.P. Kiselev, Norilsk Polar Drama Theatre. V. Mayakovsky.

“The Womb” is the director’s debut on the stage of the Moscow Art Theater. A.P. Chekhov.

“In this story, I am interested in the stage form, which allows the author’s text to sound in the theatrical space. The concentration of events in the story that happens to its heroes of change per unit of time is very high. The text is dense, thick and hard. The heroine of the story reaches the “point of no return”, in which she commits the murder of her own husband. At the same time, in an unexpected way, in the finale for Zamyatin it turns out to be important that this woman with her face, and eyes, and compressed lips reminds the inhabitants of her village the face of the Virgin.

Zamyatin leaves Afimya at the moment when she leaves her home, in which she has experienced so much. One of the main questions: why did this beautiful young woman need to go through all this and stay alive? To what extent is she to blame for what happened? I think that a person does not need to create such conditions that can bring him to a celiac, animal state, when no social boundaries work anymore, when it is impossible to appeal to some generally accepted norms. They are erased, they just don’t exist. We underestimate the energy that is born in a person brought to such a state. And this, in my opinion, is largely about today.

In Russia there will be a vaccine against tuberculosis, which will replace BCG

“Every mote is a vitamin”: loading bread in dirty gloves was caught on video