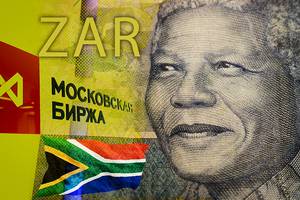 In conditions when the dollar and the euro have become much less accessible and interesting for Russians to buy, market participants are looking for alternatives for investments, and experts believe that the South African rand may well become one of them. Moreover, now it will be included in the number of traded currencies on the Moscow Exchange – from June 27, trading in currency pairs with the participation of the rand will begin on the stock exchange.

Moreover, the Russian authorities have included the rand among the currencies that can be included in the calculation of the new supranational currency, the creation of which is currently underway. At least, such a statement was made by President Vladimir Putin. He said that Russia, together with other BRICS countries, is working on the creation of a new international reserve currency based on the group’s basket.

The rand became legal tender in the late 50s and early 60s in South Africa, Swaziland, Lesotho and Namibia after they abandoned the pound. With the end of the apartheid era, it experienced periods of great volatility and depreciation.

“African” as an alternative to Western currencies

Dmitry Babin, an expert on the stock market at BCS World of Investments, notes that the South African rand has been in a slight plus against the dollar since the beginning of the year, which is the fifth result among 36 world currencies. That is, it looks pretty good against the background of the active growth of the dollar, which recently updated a 20-year high against 6 key currencies (dollar index).


The rand is a typical developing or highly profitable currency, the expert notes. The economy of South Africa occupies a dominant place on the African continent and is based on a developed financial system: the export of gold, coal, and large-scale agriculture. However, in 2020 the country experienced its biggest economic downturn in 100 years due to the pandemic.


Previously, the South African rand was often compared with the ruble: due to the conditional similarity of the economies of the two countries in terms of dependence on commodity exports, many foreign investors put these currencies on the same line in terms of profit/risk ratio. Naturally, says Babin, this comparison has lost its relevance in 2020, after the severe crisis provoked by the pandemic, as well as the ensuing geopolitical changes.


The Moscow Exchange will start trading in the South African rand on June 27, and it will be of interest as a speculative developing currency, partly an alternative to Western ones, the analyst is sure. However, according to him, due to the raw material nature of the South African economy over the longer term, the rand is unlikely to act as a protective currency for conservative savings.


Most likely, Babin suggests, on the short-term horizon, quotes will test the two-year high of the USD / ZAR pair of 16.37 rand per dollar, which they were approaching in mid-May. That is, the South African rand will weaken along with most other currencies against the US dollar amid aggressive tightening of the Fed’s monetary policy aimed at combating high inflation. On a longer-term horizon, the USD/ZAR pair is likely to be in the range of 15-17.

It will be convenient to work, saving is not very profitable

The South African rand is showing itself as a typical emerging market currency this week, said Mark Goykhman, chief analyst at TeleTrade. The dollar is slightly correcting down against the main counterparties after the rally in the first half of June, and the rand is also dutifully strengthening towards it. If in the middle of the month the USD/ZAR pair reached 16.2, then at the beginning of trading on June 23 it rolled back a little lower – to 15.9.


But in general, the American continues to be in an uptrend to the rand, as, basically, to other currencies. This, the analyst explains, is primarily due to the tightening of the monetary policy of the US Federal Reserve and the “risk flight” in financial markets due to a surge in global inflation and fears of a recession.

However, Goykhman points out that in terms of inflation, South Africa differs favorably from many developing countries. In annual terms, it is 6.5% – this is quite an acceptable value in the current conditions. In the United States, we recall, the inflation rate is 8.6%. Published on June 22, data on the consumer price index (CPI) in South Africa in May compared to April showed an increase in the parameter to 0.7% from 0.6% a month earlier. However, the core CPI (excluding energy and food prices) rose by only 0.2% – half as much as in April. Thus, this South Africa was also affected by the manifestations of the energy and food crises.

But, perhaps, the biggest problem of the republic’s economy is the colossal unemployment, which is 34.5%. More than a third of the working-age population cannot find work, which is extremely high even for Africa.

One way or another, the prospects for the exchange rate of the South American currency largely depend on the dollar, which dominates this pair, the expert believes. Over the next few days, the “American” will obviously be in some balance against the major currencies. Accordingly, we can assume calmness in the USD/ZAR pair, which will remain in the current technical range of 15.6-16.4. In the future, the quotes are able to go into the range of 17.5-18.5 in the coming months.

Against the ruble, the cross-rate of the rand is under pressure due to the strengthening of the Russian currency, continues Goykhman. From the high of the beginning of June (4.25 rubles), the rand fell to 3.33 rubles. on June 23rd. The pair is likely to continue upward dynamics in the region above 4 rubles. – in connection with the expected strengthening of the dollar in the future.

It is noteworthy, the analyst adds, that the Mosbirzha, opening trades in rand from June 27, will determine its rate directly. This is convenient not only in terms of exchange rate formation, but also directly for participants in foreign economic relations who will work with this currency. Since South Africa is not one of the “unfriendly countries”, Russian companies will have an incentive to increase trade with South Africa, which currently amounts to no more than 0.15% of Russia’s total foreign trade turnover.

Working with the South African currency on the Moscow Exchange can contribute to these processes, Mark Goykhman is sure. But as a means of investment or speculative investments, the rand is hardly attractive, since it is used little and is low-liquid, but it is accompanied by high transaction fees. The currency is not very reliable and is prone to weakening compared to the dollar.

Biden asks for billions to reduce dependence on Russian uranium

6 reasons why you should visit Wallpaper World during renovations