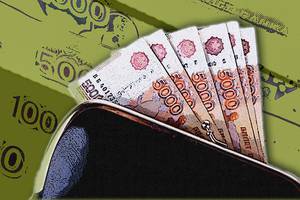 According to a recent sociological study by the Bank of Russia, the share of cash payments in our country increased to 33% in 2021. In 2020, only 30% of the population preferred cash. At the same time, the average cost of a one-time purchase paid for in cash increased over 12 months from 858 to 975 rubles.

In general, “all types of means of payment are quite popular among the population.” The share of respondents who cannot imagine their life without cash was 61%. The same number of respondents noted that they could not do without the possibility of making non-cash payments. Only 5% of Russians completely abandoned the use of cash.

A third of Russians choose cash

Visitors to most retail outlets prefer to pay by bank transfer. However, in small retail stores, the proportion of cash payments remains high at 66%. A third of citizens pay for purchases mostly in cash everywhere, this trend has continued since 2018. The most popular denominations among Russians are 100 rubles when paying for goods and services and 1000 rubles when withdrawing cash from an ATM.

In 2021, cardholders withdrew cash from ATMs an average of five times a month, and 68% of plastic card holders withdrew amounts not exceeding 5,000 rubles per visit. According to the regulator, 1,000 and 5,000 rubles are the most popular denominations when withdrawing cash from an ATM. At the same time, the share of respondents who do not use ATMs or cash deposit terminals increased from 35% to 57% last year.

In addition, according to the Central Bank of the Russian Federation, over the past year, 91% of the Russian population did not receive counterfeit banknotes. Having received fakes, citizens most often return them to those from whom they received them (47%), and also tear them up and throw them away (24%). Only 12% of citizens turn to the police when receiving a fake. Only 7% send it to the bank for examination. At the same time, every tenth person keeps a counterfeit banknote.

Statistics for 2021 does not say anything, Nikolai Pereslavsky, an employee of the Department of Economic and Financial Research at the CMS Institute, told Expert. In fact, it was the year of the exit from the pandemic, when the maximum number of restrictions were lifted, so it is logical that the share of non-cash payments dipped a little. At the same time, in 2022 it has already grown to 75.5%, and by the end of the year it may reach 77%, which will eventually be 10% higher than in 2021. But global conclusions should not be drawn from such statistics. After all, the preferences of Russians regarding cash as a whole will remain unchanged.


The average amount of a purchase for cash is also difficult to estimate, since for Moscow, say, it may not be enough, but for a town in the outback, 975 rubles is a lot, the expert continued. The fact that the amount itself has grown is also logical. Firstly, those establishments that were inaccessible last year due to restrictions were gradually opened. Secondly, inflation, of course, played a role, and double-digit price increases could not go unnoticed. But this is a statistical indicator, which does not make sense to pay too much attention. For example, if Visa and Mastercard would stop working in Russia altogether, both the average check and the share of cash payments would be higher.

When paying, the most popular banknotes are used, while issuing from an ATM – the most convenient ones, added Nikolai Pereslavsky. It just so happened that the largest turnover among banknotes belongs to a banknote of 100 rubles, and in an ATM it is most convenient to receive money in thousandth banknotes.

The events that began in February 2022 led to a panic, in connection with which the population ran to banks to “stock up” in cash, Oksana Aisina, CEO of ABE Consulting, head of the Public Reception Office of Moscow, told Expert. In her opinion, the increase in the share of cash payments is due to a greater extent to the fact that the amount of cash in the population has increased. He did not grow up from a good life, and this indicator cannot speak of an increase in income. All these are echoes of political instability and those sanctions measures and restrictions that are imposed on our country.

The population for themselves saw the risks of keeping money in credit institutions after the imposed sanctions and partial bans on money transfers. Difficulties also arose in the stock and debt markets. It should be noted that today the financial literacy of the population in the Russian Federation is still not at the proper level, and people do not always correctly respond to the market changes that are taking place.

Comparing the totality of these factors, Oksana Aisina concluded that the increase in the share of cash payments was partly due to the fact that the population had a lot of cash “under the pillow”. In early March, many rushed to sell rubles. And they did it on a speculative market at a completely inexplicable rate. To date, without assessing all the risks and putting these funds under the same conditional “cushion”, they have not been able to change their financial situation for the better.

It is impossible to exclude the desire of business circles to save money, “to divert their turnovers into the shadows,” the expert noted, not ruling out that this situation is partly caused by the government’s announcement of a moratorium on inspections. On the one hand, measures to support business are now urgently needed, and on the other hand, there is a violation of the law, an unscrupulous approach, expressed in an increase in the turnover of gray cash and, as a result, in the growth of shadow business activity. This, of course, is a negative factor for the owners. Despite the restriction of inspections, no one said that the control was completely removed, and inspection activities would not resume in the near future.

Returning to the issue of the amount of cash money supply, Oksana Aisina drew attention to the fact that today it is important for the regulator to create the most positive information background so that depositors can once again believe in the country’s credit system. The actions taken by the Central Bank in March to save non-cash were very effective. Soaring rates on deposits, of course, did not allow an outflow of money to occur. However, a certain part still left, and it must be returned, on which the Central Bank is actively working.

According to the expert, the return of people to cashless payments will be quick when the markets stabilize. Moreover, many of us have already become accustomed not to carry cash, but to use either cards or electronic systems. Now domestic banks are actively implementing such systems, but this takes time.

Zelensky called the conditions for withdrawing from negotiations with Russia. News of the day in the world and Russia today

News: Rosneft to sue US Treasury for defamation – Expert